Take Me Where You Want Me to Go 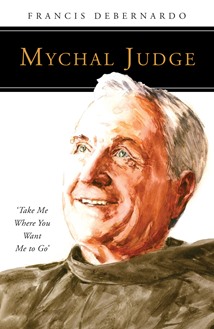 The world came to know the Franciscan priest Mychal Judge through the bravery and self-sacrifice he displayed during the World Trade Center attacks of September 11, 2001. But long before his lifeless body was carried out of the rubble (a moment captured in a photograph that became immediately famous), and before he was officially designated "Victim 0001" of that day's attacks, Fr. Judge was, to a great many people, a beloved priest known for his compassion and faith.

In Mychal Judge, Francis DeBernardo offers a spiritual biography that will move and fascinate readers. It details the personal history and experiences—including his Irish-American upbringing, his struggles with alcoholism, his care for the marginalized, and his ministry to firefighters—that formed the man who ultimately died running into the North Tower to try to save and minister to the terrified and the dying. Whether meeting him in these pages for the first time or getting to know him better, readers will encounter in Fr. Judge a figure they will not soon forget.

Francis DeBernardo has served since 1996 as executive director of New Ways Ministry, a national Catholic ministry of justice and reconciliation for lesbian, gay, bisexual, transgender, and queer Catholics and the wider church community. He earned a Master's in English from the University of Maryland (UMD) and has completed doctoral coursework in Rhetoric there and at the Catholic University of America. He has taught courses in writing, rhetorical theory, and literature at UMD. He is currently a board member of the Quixote Center, and he serves on the advisory board of the Catholic Committee of Appalachia. His writing has appeared in Commonweal, the National Catholic Reporter, and American Catholic.

"A robust and tender volume about a man made infamous in death on 9/11, his body a symbol of that day. From childhood through changes and challenges, DeBernardo skillfully tells the story of Mychal Judge's life. Reminding us that the wounds are where the healing will be, this book is illuminating. DeBernardo reveals the many sides of Judge's true humanity, and his gift of being a most wounded—and skilled—healer."
Fran Rossi Szpylczyn, is a freelance writer and retreat leader, and is the pastoral associate for administration at Immaculate Conception in Glenville, New York

"The extraordinary life of Mychal Judge—Franciscan priest, fire department chaplain, counselor to LGBTQ people, hero of 9/11—shows us many things. It shows us what it means to live out a religious vocation in the modern world; it shows us how Franciscan spirituality is ever green and ever new; and it shows us, as if we needed any more assurance, that you can be gay and holy."
James Martin, SJ, author of Learning to Pray and In All Seasons, For All Reasons

“This book provides readers with a window into the life, the mind and, most movingly, the heart of Father Mychal Judge. Many know the Franciscan friar’s name because of his heroic last day of Christian ministry to and with the victims of the September 11 attacks, but few know about the many decades of life that preceded it. Francis DeBernardo shares the very human story of a very holy man whose struggles and challenges were as significant in his Christian journey as any success or accomplishment. This book will deepen your appreciation for the life and legacy of Father Mychal Judge.”
Daniel P. Horan, OFM, Professor and Director of the Center for Spirituality, Saint Mary’s College, Notre Dame, Indiana

"Fr. Mychal Judge became world famous on September 11, 2001, through an iconic photo that symbolized the horror of that day. This book is the story of the generous hearted, compassionate Franciscan friar behind the photo. It is what we need in a divisive time to renew our own paths to community."
Simone Campbell, SSS