The Bible: From Late Antiquity to the Renaissance

Writing and Images from the Vatican Library 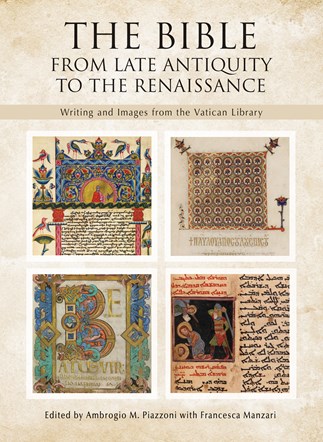 The Bible has inspired scholarly and artistic achievements all over the world since Late Antiquity. The largest and most diverse collection of Bibles, in both their calligraphic and illuminative expression, is archived at the Vatican Library. The scholars who contributed to this volume were given unprecedented access to the Vatican Library archive and, while focusing on the written and illustrative themes of the Bible, have created the most comprehensive chronology to date.

This volume is a journey led by major international scholars through the Bible's development from Late Antiquity to the Renaissance era, allowing all readers of the Bible to marvel at the wisdom of the writings and beauty of the illustrations, many available here for the first time.

Ambrogio M. Piazzoni (1951) is the vice prefect of the Vatican Apostolic Library, first layman to hold this position. A graduate of Sapienza-University of Rome, educated in medieval history and specialized in palaeography, he spent a number of years as a cataloguer of manuscripts in the Vatican Library before taking charge for the introduction of the computerized cataloguing of manuscripts. As vice prefect (1999), he is also the scientific director of cataloguing of the Vatican Library manuscripts and director of the Library's publishing department. He teaches Latin palaeography, which pertains to both writing and illuminations, at the Augustinianum University in Rome. He has published a number of books and more than a hundred articles in scholarly journals and collective works on subjects related to medieval cultural history, biblical exegesis in the Middle Ages, Church history, and history of the Vatican Library.

Francesca Manzari (1967), PhD, is researcher in history of medieval art at Sapienza-University of Rome, where she teaches history of illumination. She has taken part, as author and part of the editorial staff, in the Enciclopedia dell'arte Medievale and in the journal Arte Medievale. In 2015 she won the Houghton Mifflin Fellowship for research at Harvard University. She has published several volumes and extensively in international journals, also in various languages. She was on the advisory board for the exhibition Beyond Words: Illuminated Manuscripts from Boston Collections (Harvard University; Boston, September 2016-January 2017), ed. J. Hamburger, W. Stoneman, A. M. Eze, L. Fagin-Davis, N. Netzer. Her research has centered on liturgical and devotional books and manuscript illumination in Avignon and Italy. She is currently working on a book on illumination in Rome during the Great Western Schism.

"This book is a noble representation of what lies in the BAV (Bibliotheca Apostolica Vaticana). It contains literally hundreds of gorgeous full-color photos of the finest pages of the best ancient bibles.
American Benedictine Review

"An absolutely beautiful book, a work of art in its own right. A unique volume that would enhance every theological library. Kudos to Liturgical Press for producing this splendid English translation of the original Italian edition."
The Bible Today

"The serious scholarship of this volume is matched only by the beauty of the reproductions of dozens of images of biblical manuscripts found in the Vatican library. The writing is technical but not inflated, so that the average, well-informed Catholic can understand and appreciate the various articles."
The Catholic Response

"Sound scholarship and gorgeous images characterize this collection. In all, this is as much a celebration of the Vatican Library's important holdings as it is a survey of Christian writing and art over some fourteen centuries."
Catholic Library World

"Simply a magnificent volume. It is also massive! As first glance it looks like a coffee table book on steroids: over a foot long and nearly a foot and a half along the spine, it contains more than three hundred and sixty thick glossy pages. I highly recommend this volume to those interested in biblical art, the history of biblical manuscripts, or anyone who teaches the Bible. This is a truly beautiful book with careful scholarship from specialists in each manuscript area."
Reading Religion