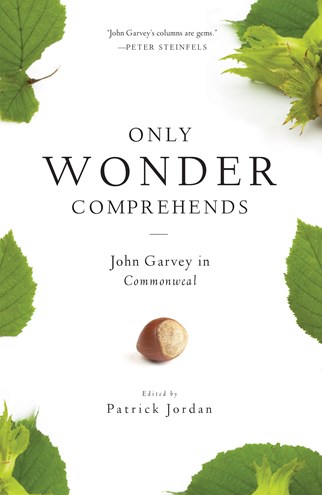 For over forty years, John Garvey was the "ballast" of Commonweal magazine. His award-winning essays and consistently notable columns revealed not only his acuity and alacrity, but his uncommon spiritual insight. These in turn provided momentum and substance for whatever followed in an issue of the magazine because Garvey never hesitated to wrestle with some of the most challenging and intractable topics of the day, and did so with a rich pastoral sensitivity, and a refreshing and rare intelligence.

Only Wonder Comprehends gleans from John Garvey's many contributions to Commonweal that reflect his spiritual depth and deep appreciation of history, politics, theology, and culture. Steeped in the Christian tradition, Garvey loved to write and, in return, his readers relished what he wrote. It is hoped that this collection of his writings from Commonweal will inspire readers to cultivate a similar sense of attentiveness and commitment, for as the author himself observed, "Religious traditions are meant to transform us, not to affirm us as we are."

John's columns are gems of the plain style: conversational, first-person, direct, without elaborate metaphors or clever categories. He introduced people from his pastoral experience or from the rest of his everyday life: `I once knew a man who..' Or, `A woman who sat next to me on a four-hour bus ride..' Where many columnists dwell on the world's wholesale miseries, John went retail: the loss of a loved one, or of love, or of faith, or of purpose.
Peter Steinfels