The Catholic Church in Southwest Iowa

A History of the Diocese of Des Moines 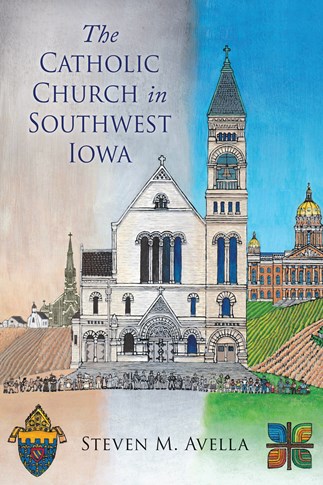 Commissioned by the diocese to commemorate its centenary, this is the first book-length study of the history of the Roman Catholic Diocese of Des Moines, Iowa. Formally established in 1911, the Diocese of Des Moines built on the foundations laid by earlier generations of missionaries, religious women, priests, and bishops to provide a gathering point for the scattered Catholic population of southwest Iowa. This book weaves together the various stories of religious and lay members in the forging of a visible religious presence in the region. Influential priests of the diocese included Monsignor Luigi Ligutti, who became a renowned advocate of rural life, and Bishop Maurice Dingman, who took on sometimes controversial social and political issues. In October 1979, the diocese hosted Pope John Paul II for a short but memorable visit, which was the largest religious gathering in Iowa's history.

Steven M. Avella is a priest of the Archdiocese of Milwaukee and a professor of history at Marquette University in Milwaukee, Wisconsin. Avella has authored numerous books and articles on Catholicism in the United States, including histories of the Archdiocese of Milwaukee, the Archdiocese of Chicago, and the Catholic Church in the city of Sacramento, California. He has done several popular studies of dioceses, including Phoenix, Colorado Springs, and Reno. Avella has taught US Catholic history in seminaries, and at Marquette he offers courses in twentieth-century US history.

"This fascinating and well-researched volume not only informs us of the history of the Catholic Church in Southwest Iowa, but describes the growth of religion in the US Heartland. Avella's history of the Diocese of Des Moines from 1911 emphasizes the interplay of the sacred and the secular. The lively spirit of Catholicism from Bishops Dowling to Dingman is broadly illustrated in this excellent contribution to US church and local history."
Mary Christine Athans, BVM, PhD, Professor Emerita, The Saint Paul Seminary School of Divinity of the University of St. Thomas

"This fascinating and well-researched volume not only informs us of the history of the Catholic Church in Southwest Iowa, but describes the growth of religion in the US Heartland. Avella's history of the Diocese of Des Moines from 1911 emphasizes the interplay of the sacred and the secular."
Most Rev. Jerome Hanus, OSB, Archbishop Emeritus of Dubuque

"An impressive book for many reasons. It is an accessibly written examination of the history of the Des Moines diocese and is the first in-depth look at Roman Catholicism in the Hawkeye state. Academics and laypersons alike will benefit from Avella's careful archival work that informs his telling of the history of the diocese."
Kristy Nabhan-Warren, American Catholic Studies

"Fr. Steven Avella has produced an exceptional history of Catholicism in the American heartland. Based on rigorous, scholarly research and written in clear, compelling prose, Fr. Avella tells the story of the Diocese of Des Moines during the ten tumultuous decades of the twentieth century. This book will be of value not only to academic historians but also to general readers interested in the evolution of the Catholic Church in a diverse American diocese composed of small cities and big towns bound together by hundreds of bustling farms."
Timothy Walch, PhD, Author of Parish School: The History of American Catholicism from Colonial Times to the Present

"Fr. Steven Avella has produced a serious, thoughtful, and engaging history of the Diocese of Des Moines. As you will see, the story of the Catholic Church in Southwest Iowa is filled with men and women of great faith, who enriched the lives of all people in this region through selfless engagement in education, medical services, and countless other charitable endeavors. This book shows how the Catholic Church in the Diocese of Des Moines has offered the love of Jesus Christ to the poor, the immigrant, and the farmer for more than one hundred years. After reading this compelling history of Catholics in Southwest Iowa, one can only hope that future harvests will be just as fruitful!"
+Timothy Cardinal Dolan, Archdiocese of New York

"From the day Fr. Samuel Mazzuchelli first set foot on Iowa soil in the 1830s, Catholic bishops, priests, nuns, and laity have impacted the history of this state far beyond the number of the faithful. As Fr. Steven Avella has captured in this sweeping narrative of the Diocese of Des Moines, the moral impulses planted by those earliest religious pioneers would uplift generations. From its nineteenth-century origins, this exceptional twentieth-century legacy provided the foundation upon which Bishop Richard Pates would extend into the twenty-first century this tradition of peace and justice—the next chapter in Iowa's Catholic odyssey."
Ambassador Kenneth M. Quinn (ret.), President, The World Food Prize