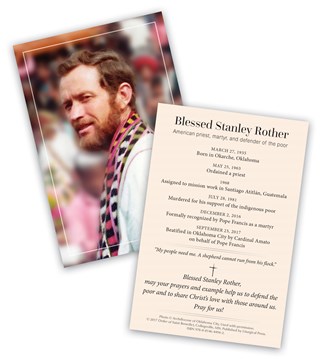 On September 23, 2017, an American priest whom Pope Francis formally recognized as a martyr in 2016 was beatified. Blessed Stanley Rother was murdered in Guatemala in 1981, after thirteen years of missionary service there. He was killed because he insisted on respect for the dignity and rights of the indigenous poor people whom he served, at a time when government forces were intent on oppressing them.

This new prayer card is an ideal resource to introduce Blessed Stanley Rother to parishes, schools, families, and others. One side provides brief biographical information and a prayer to Blessed Stanley Rother, while the other side features a striking, full-color image of him. High quality card stock means this card is both beautiful and durable. To make it more easily available to parishes and other groups, budget-friendly bulk pricing is offered.