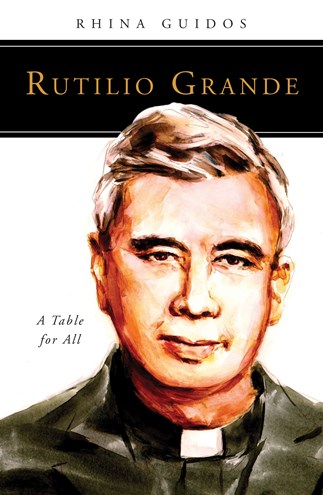 A Table for All
Rhina Guidos

This book, so beautifully and cleanly written, captures the life, ministry and gift of Rutilio Grande, SJ. Rhina Guidos successfully portrays the personality of a priest who lived, ministered and died with and for his people, a pastor who embodies the priestly ministry hoped for by Pope Francis. The style and accessibility of this text accurately presents the pastoral-theological model that was uniquely Rutilio Grande, his effect on the people he served, and the consequences of his love in a world that continues to crucify marginalized peoples.
Thomas M. Kelly, Professor of Theology, Creighton University


Rutilio Grande: A Table for All, the story of Fr. Rutilio Grande touched my heart and my soul. It brings to life the story of Fr. Tilo's mission in his native country and his 1977 assassination as the first martyr of the Salvadoran Civil War. After 40 years our memory of the plight of the Salvadorans and the terror in their daily lives has faded. Rhina Guidos shows why this Jesuit priest's hallmark work to build faith communities that welcomed everyone to the table has placed him on the road to sainthood. Fr. Rutilio's memory is still alive in his people. He should rightly be thought of as the Martyr of Rural Evangelization. "Rutilio Vive."
Matthew Schiller, Catholic New York


Though he was the spark that set the Gospel afire in the heart of Blessed Oscar Romero, Rutilio Grande has stood humbly in his shadow over the decades. Rutilio Grande: A Table for All helps to rectify that situation. It's a "must read" for those who want to continue to renew the church in the spirit of Vatican II or to simply read about a modern-day martyr.
Father Jim Gardiner, SA, Vice President of the Religion Communications Council of Washington D.C.