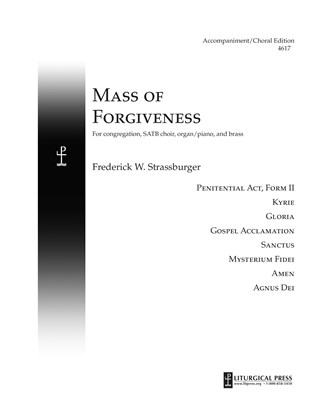 Written for assembly, SATB choir, organ / piano, and brass, the Mass of Forgiveness is a festive, accessible setting of the Ordinary of the Mass. Originally composed as the Mass in E Minor, this setting has been revised for the 2010 Roman Missal texts.

Frederick W. Strassburger currently serves as the director of music and liturgy and organist at the Church of Saint Peter Claver in Sheboygan, WI. He has also taught choral at Saint Bede Academy, and served as choirmaster, composer and organist at Saint Bede Abbey in Peru IL. Frederick's Mass in A Minor is also published by Liturgical Press.

In addition to this Accompaniment/Vocal Score edition, other online resources for the Mass of Forgiveness will include:

All music published and administered by Liturgical Press is covered under OneLicense.net and you can report assembly usage through their website.

If you do not have OneLicense.net, a lifetime assembly reprint license for this Mass setting (melody / text only) is available by calling us at 800.858.5450.

Unauthorized copying, reproducing, republishing, distributing, forwarding, posting, transmitting or transferring this music to another party is a violation of copyright law.