Martyr of the Suffering Church 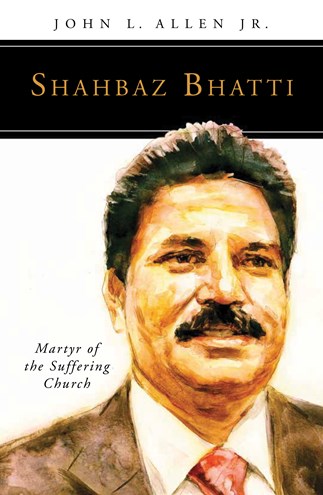 When Shahbaz Bhatti, the lone Christian in Pakistan's cabinet and a determined campaigner for the rights of Christians and members of other faiths was killed, his Taliban-affiliated assassins probably hoped it would be the end of his influence. Instead, Bhatti's stature has only grown after death, and today he looms as a martyr and patron saint for persecuted Christians everywhere. His riveting life, from devoted altar boy in an overwhelming Muslim nation to human rights campaigner, from politician and government minister to martyr, is one of the great Christian dramas of our time, and as long as Christians are at risk anywhere in the world, Shahbaz Bhatti will be a source of inspiration and hope.

This book traces the evolution of a martyr, from his roots in a traditionally Catholic village in the Punjab region of Pakistan through his awakening as an activist and political leader. It also explores the possibility that Bhatti may one day be declared a saint of the Catholic Church. It's a story that deserves to be told, everywhere and always, until it's part of the common heritage of Christianity and all humanity.

John L. Allen Jr. is the editor of Crux, specializing in coverage of the Vatican and the Catholic Church. He has written nine books on the Vatican and Catholic affairs, and is a popular speaker on Catholicism both in the United States and internationally. He is a senior Vatican analyst for CNN, and was a correspondent for the National Catholic Reporter for sixteen years.

John Allen has been a prophetic voice on behalf of Christians suffering persecution around the world. This book reminds us, who can practice our religion without fear, that some of our brothers and sisters live in constant peril.
Thomas Reese, SJ, Columnist, National Catholic Reporter

The last hundred years might be labeled `the century of persecution and mass slaughter.' From the Bolshevik Revolution to the Nazi death camps and from the abortion holocaust to the persecution and slaughter of Christians and other religious minorities in the Middle East, Asia, and Africa, the principle of human dignity has been wantonly and horrifically cast aside. But as God always brings good out of evil, He has raised up heroes to fight for the dignity and rights of the persecuted. One such hero was the Servant of God Shahbaz Bhatti of Pakistan. In this book, John Allen beautifully and lovingly tells the story of his life-and martyrdom.
Robert P. George, McCormick Professor of Jurisprudence, Princeton University

The story of Shahbaz Bhatti, slain for his outspoken criticism of Pakistan's blasphemy laws, is an important and disturbing lesson on anti-Christian persecution. It's a must-read for Catholics who care about religious freedom. Allen does not skip over the criticism Bhatti faced, even among some Christians, for his "pugnacious" activism and his use of partisan politics in the advancement of religious rights. Yet he makes a strong case for considering Bhatti a modern martyr and a patron of religious freedom.
John Thavis, author of The Vatican Diaries