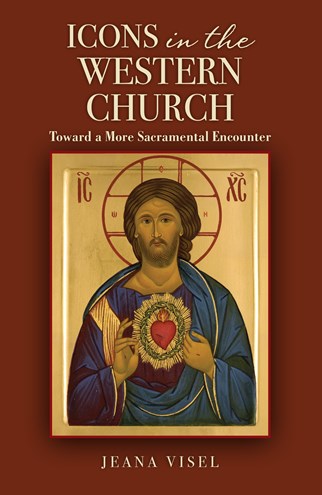 Icons in the Western Church

Within the Eastern tradition of Christianity, the eikon, or religious image, has long held a place of honor. In the greater part of Western Christianity, however, discomfort with images in worship, both statues and panel icons, has been a relatively common current, particularly since the Reformation. In the Roman Catholic Church, after years of using religious statues, the Second Vatican Council's call for "noble simplicity" in many cases led to a stripping of images that in some ways helped refocus attention on the eucharistic celebration itself but also led to a starkness that has left many Roman Catholics unsure of how to interact with the saints or with religious images at all.

Today, Western interest in panel icons has been rising, yet we lack standards of quality or catechesis on what to do with them. This book makes the case that icons should have a role to play in the Western Church that goes beyond mere decoration. Citing theological and ecumenical reasons, Visel argues that, with regard to use of icons, the post-Vatican II Roman Catholic Church needs to give greater respect to the Eastern tradition. While Roman Catholics may never interact with icons in quite the same way that Eastern Christians do, we do need to come to terms with what icons are and how we should encounter them.

Jeana Visel, OSB, joined the Sisters of St. Benedict of Ferdinand, Indiana, in 2003. A northern Illinois native, she completed a BA in religious studies from Kenyon College and an MA in theology with a concentration in monastic studies from Saint John's School of Theology and Seminary. She is working on a DMin in spirituality from The Catholic University of America. She has been studying icon painting since 2006, completing workshops with master iconographer Xenia Pokrovsky and continuing studies with iconographer Marek Czarnecki. She works at Saint Meinrad Seminary and School of Theology.

"Just as the words of Scripture have been carefully transmitted to us down through the ages, the icon likewise embodies our faith in wood and paint and shimmering gold. Jeana Visel gives us a well-grounded and insightful way to think about this traditional art form in new ways and its possible integration into Western worship. Visel's approach is enriched by the personal experience of being an accomplished icon writer herself. This book is a must for all who are interested in the integration of liturgy and the arts."
Martin Erspamer, OSB, Saint Meinrad Archabbey


"Jeana Visel provides those who are interested in studying the aesthetics in the worship space an indispensable liturgical study of icons or panel paintings. It will provide an opportunity for those who read it to begin a theological dialogue within themselves and with others who gaze upon the word of God in the Icon."
John E. Hugus, APC, Journal of the Academy of Parish Liturgy


"Sr. Jeana Visel has done us a great service in her book. She writes with great lucidity, sensitivity, and learning about the need for the Western Church to embrace icons as part of its patrimony. After outlining the historical and theological background of the icon, she boldly and intelligently addresses the contemporary challenges facing the icon's integration into the Western Church. A book for all Roman Catholic laypeople, and of great interest to Orthodox readers also, at the very least it should be mandatory reading for every Catholic seminarian, priest, and church architect."
Aidan Hart, British Iconographer and Writer


"This intelligent study, noting everything from aesthetics and liturgical studies to theology, is an indispensable work for those who want to incorporate icons into Western worship and devotions. Grounded in solid scholarship and gracefully written, it is a most welcome volume on a quite timely topic."
Lawrence S. Cunningham, The University of Notre Dame


"Beginning with an overview of the Eastern theology of icons and the Western Church's understanding of the role of images in liturgy and catechesis, Visel seeks to find common ground before making a spirited case for the adoption of iconography within a distinctively Western Church."
Catholic Library World


"For any reader unfamiliar with icons or the Roman Catholic perspective on icons this text provides a succinct, well-written overview of these topics. This text is an original work that would be well-situated for students of art history, iconography, or Orthodox-Catholic ecumenism."
Walter N. Sisto, Catholic Books Review


"This lovely book by Sr. Jeana Visel offers a remarkably fresh approach to the sacred iconic art of the ancient Church and shows how it can be a spiritual resource to renew worship across the traditions: Orthodox, Catholic, and Protestant. It wears its (significant) learning lightly. It takes the reader through a well-rounded history of iconography, and basing itself in the Western Christian tradition of response to that (for the West was always a little more wary of ascribing sacramental value to the icons) it shows how, although conflicted in some respects (such as wishing to restrict the role of religious art more to a didactic function), the Western iconic tradition has been wider and more nuanced than often presumed. The study has a very interesting set of theological reflections on the sacramentality of art following Vatican II. The conciliar call in the sixties for a `noble simplicity' to be introduced into church furnishing and liturgical fabric sometime s led to a crisis of banality in the artistic decoration of churches. Visel argues powerfully here that deep iconic art has the charisma to bring grace to contemporary worship, just as it did in times past, and can serve as an ecumenical rapprochement, with Catholicism's iconic tradition standing in a median role between the Orthodox and the Protestant worlds in their different understanding of icons as gateways to divine grace. Fifty years ago, icons (excepting Our Lady of Perpetual Succour) were hardly ever seen in the Catholic Church. Now they are a dominant form of spiritual expression. They have begun to make a more familiar appearance in many of the Reformed churches too. It has been a remarkable, unplanned, ecumenical outreach from the East, partly initiated by an unlikely evangelist, Stalin, selling off his Russian Church's great treasures to fund his machine of oppression. These quiet exiles brought their grace to the West once more and whispered a word of ecumenical g race and peace. Visel's book continues that `secret ministry.' The text has been produced by Liturgical Press with a deep artistic sensibility: its numerous illustrations make it a beautiful thing to possess. A little treasure. Highly recommended."
Archpriest John A. McGuckin, Nielsen Professor of Byzantine Christian History, Columbia University, New York


"Icons in the Western Church is a fascinating, helpful book for anyone who admires icons yet lacks an in-depth understanding of their background and purpose. Well-researched and clearly written, this work will help the reader sort through the theological, liturgical, and ethical issues involved in the use of icons in the Western Church. In this timely, ecumenically sensitive, and thought-provoking book, the author provides nuanced suggestions concerning the placement of icons in churches and homes of the faithful and also challenges the practice of some artists in creating `new' icons."
Rita Ferrone, Editor of The Yale ISM Review