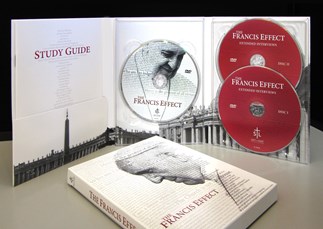 On February 11, 2013, Pope Benedict XVI's resignation sent shockwaves through the Catholic Church and raised serious questions about its future direction. One month later, after only five ballots, the Cardinals elected the serene and unassuming Jorge Mario Bergoglio, Archbishop of Buenos Aires as the 266th Pope of the Catholic Church. He would be called Francis.

From the moment Pope Francis appeared on the balcony of St. Peter's Basilica, he won the hearts of the people. His humility, simplicity and closeness to the poor reveal a man deeply in touch with the Gospel. His profile has soared. He has initiated a fundamental reform of the Roman Curia, challenged a "globalization of indifference," and become the most talked about person in the world.

The Francis Effect takes a critical and in-depth look at how an ancient institution is rapidly changing under the leadership and vision of Pope Francis. Exclusive interviews with prominent Catholics and non-Catholics reveal that Francis is having a profound effect on the world as well.