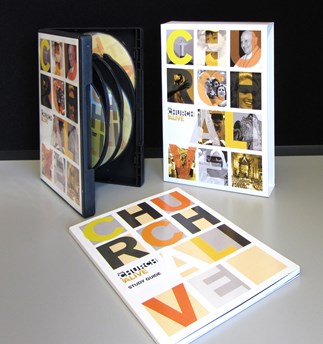 For many, Catholicism is a mere cultural label or ritual obligation. This begs the question: is Catholicism still relevant? Despite unprecedented advances in all areas of life, the fate of the human family hangs precariously in the balance. What does the church have to say about economic upheaval, environmental devastation, or the double-edged sword of technological innovation? To many, the Catholic Church seems out of touch, always arriving late on the scene. But is this really the case? What accounts for its surprising resilience and persistent relevance?

Join Cheridan Sanders and Sebastian Gomes as they explore the church's mission to embrace the joys and hopes, grief and anguish of today's world. By highlighting the broad and inclusive nature of Catholicism in its rich tradition and sharing stories of new evangelization in action, The Church Alive series inspires a new way of thinking about what it means to be Catholic today.

The seven-disk boxed set includes thirteen 25-minute episodes on topics such as the role of the laity, social justice, economics, the consecrated life, Catholic education, and more. Also includes a 70-page study guide.

Disc One
Episode 1: What is the New Evangelization (28 min)
Episode 2: Catholic Education (24 min)