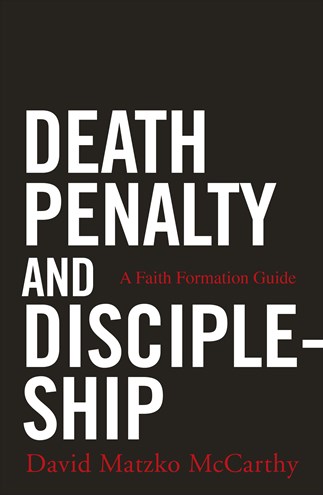 David Matzko McCarthy's Death Penalty and Discipleship is a faith formation resource to help communities and individuals reflect more deeply on capital punishment. It incorporates Scripture, Catholic social teaching, and contemporary issues that focus on the meaning of God's self-giving in Jesus Christ and the implications of God's redemptive work in our lives. McCarthy shows how the church's stance against the death penalty fits with Scripture, even passages such as "an eye for an eye..." (Lev 24:19-20); he attends to the teachings of Jesus and draws out themes of restorative justice; and he concludes by locating work to end the death penalty within St. John Paul II's call for a new evangelization.

God loves the world and gives himself to the world, and we are called to share God's justice and mercy with others. In this insightful and challenging resource, McCarthy encourages us to follow the call of Pope Francis to live out the love and mercy of God for all the world.

David Matzko McCarthy, PhD, is the Father Forker Professor of Catholic Social Teaching in the theology department at Mount St. Mary's University. He is the coeditor of Where Justice and Mercy Meet: Catholic Opposition to the Death Penalty (Liturgical Press, 2013), and the founding editor of the Journal of Moral Theology.

David McCarthy's Death Penalty and Discipleship is an accessible, practical resource that is perfectly designed for use in study groups, parishes and classrooms. Yet while engaging and accessible with its video clips reference and reflection questions, it is written by one of the American Church's most important theologians. This rich book will reward users, and is a perfect example of placing theological expertise at the service of the people of God.
William C. Mattison III, The Catholic University of America


Human dignity-that of the convicted as well as our own-is best served by not resorting to this extreme and unnecessary punishment. As Death Penalty and Discipleship: A Faith Formation Guide makes clear: Modern society has the means to protect itself without the death penalty.
Archbishop Thomas Wenski, Archdiocese of Miami


This text will serve as an invaluable resource for those seeking to engage in formation of conscience, both personally and communally, around the practice of capital punishment. Small faith communities, parishes, and adult faith formation programs will find it accessible, thoughtful, and well grounded in Scripture and the wisdom of ecclesial tradition.
Margaret Pfeil, The University of Notre Dame


This slim but pithy volume provides a timely opportunity for reflection on the nature of sin, forgiveness, and the dignity of all human beings. A "key points" section at the end of each chapter lends itself well to small group discussion.
Catholic Library World