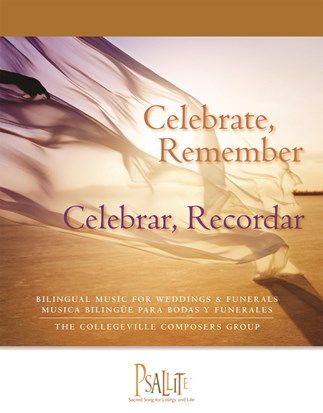 Celebrate, Remember / Celebrar, Recordar is a resource of new music that will refresh your parish repertoire! For weddings, three new pieces designed for the revised edition of the Rite of Marriage (Entrance Processional, Responsorial Psalm, and Acclamation after the Exchange of Vows or Rings), plus new Spanish versions of three existing Psallite pieces. For funerals, four new pieces (Entrance Chant, Responsorial Psalm, Communion Psalm and Song of Farewell) plus an updated version of an existing Psallite piece.

All the new music in this volume has been composed bilingually and works perfectly in English and Spanish. Includes full keyboard and guitar accompaniments, assembly parts, cantor parts, and choir descants.

Paul F. Ford, PhD, is professor of systematic theology and liturgy, St. John's Seminary, Camarillo, California. He is an internationally recognized authority on the life and writings of C.S. Lewis His award-winning book, Companion to Narnia (HarperCollins) is now in its fourth edition. Cardinal Mahony honored him with the Laudatus Award in 1995 "for excellence in promotion of the liturgical life of the parishes and the people of the Archdiocese of Los Angeles." Dr. Ford's publications also include eleven entries in C.S. Lewis: A Reader's Encyclopedia (Zondervan) and By Flowing Waters: Chant for the Liturgy (Liturgical Press).

Cyprian Consiglio, OSB Cam, is a monk of New Camaldoli Hermitage in Big Sur, California, where he currently serves as prior of the community. An internationally known performer, recording artist, and composer, he has recorded and published many collections of sacred and liturgical music. A student of the world's spiritual traditions, Cyprian's music and writing are both heavily influenced in Western as well as Asian spirituality, in which he has been immersed for many years. He is the author of Prayer in the Cave of the Heart: The Universal Call to Contemplation, and Spirit, Soul, Body: Toward an Integral Christian Spirituality published by Liturgical Press.

Catherine Christmas is liturgy and music advisor for the diocese of Arundel and Brighton, England, and is also organist of St John's RC Cathedral, Portsmouth and an adjunct faculty member of St John's Seminary, Wonersh. She obtained her MA in Pastoral Liturgy from Heythrop College, part of the University of London, and has worked in the past as a cathedral director of music, an elementary school vice principal, and a parish pastoral associate.

Carol Browning currently serves as music director for King of Glory Lutheran Church, in Newbury Park, California, and has been active in music ministry for more than twenty-five years, in Roman Catholic, Lutheran, Episcopal, and Presbyterian settings, although she is a member of the Religious Society of Friends (Quakers). She also leads a monthly ecumenical contemplative prayer at an Episcopal parish and freelances as a pastoral musician. As a liturgical composer, in addition to her work with the Collegeville Composers Group, Carol is published by GIA Publications, Inc. and MorningStar Music, and is an independently published inspirational songwriter. She has contributed articles to GIA Quarterly, World Library's AIM: Liturgy Resources, and a chapter for OCP Publications' book, Liturgical Ensemble Basics.

Anna Betancourt is the music director at St. Polycarp Church in Stanton, California, and Spanish choir director at the Cathedral of Our Lady of Angels in Los Angeles. Anna has been a lifelong member of St. Linus parish in Norwalk, California where she served as Music Director for many years. She has over 27 years of experience directing various choirs ranging from Spanish and Traditional choirs to Handbell, Children's and Contemporary Ensembles. Anna is a graduate of Loyola Marymount University where she studied under the direction of Paul Salumonovich and later returned to work as Assistant Director of Liturgy and Music for Loyola Marymount University Campus Ministry. Anna has participated in over 40 recordings with various Catholic artists and composers including Pedro Rubalcava, Bob Hurd, Jaime Cortez, Tony Alonso, Peter Kolar, Rafael Moreno, and John Angotti.

View all Psallite products by The Collegeville Composers Group here.

The collection offers many new options for the pastoral musician looking to revitalize the community's repertoire for these ritual moments. It is a most welcome addition to the repertoire.
Pastoral Music Notebook


Sign up for our email updates, save 20% off your next purchase and learn about new product and deals.
Sign Up Now