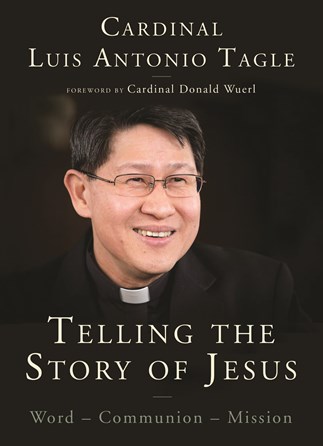 Telling the Story of Jesus

Cardinal Luis Antonio Tagle offers one of the most inspiring and influential voices in the global Catholic Church today. In Telling the Story of Jesus, he encourages readers to be in communion with Jesus, who is the story of God. The cardinal tells us that this communion is found in the Eucharist as well as among the lost, the tired, and the abandoned people of this world.

In this collection of powerful addresses, Tagle focuses on three fundamental dimensions of Christian experience: authentic spiritual worship of Jesus in and beyond Eucharist, our communion in the word of God, and the mission each one of us has to tell the story of Jesus based on our experience of him. Cardinal Tagle combines biblical narration and personal experience with sound theological reflection so that the story of Jesus becomes a story of love that leads to hope for the poor, for the church, and for the life of the entire world.

Luis Antonio G. Cardinal Tagle is archbishop of Manila, Philippines. Cardinal Tagle is a theologian and church historian of international distinction, and a pastor close to the people and to the poor. He was most recently appointed by Pope Francis as a member of the Pontifical Council for the Laity, president-delegate of the Third Extraordinary Synod of Bishops on the Family, and a member of the Sacred Congregation for Institutes of Consecrated Life and Societies of Apostolic Life.

"With the wisdom of a theologian and the passion of a shepherd, Tagle tackles the connection between believers and the contemporary world."
Emmanuel magazine


Cardinal Tagle . . . offers a refreshing focus on the New Evangelization with three presentations on the Word of God, the Eucharist, and the mission of the Church. He, with his well-recognized ability as a true master catechist, reflects on the core of the kerygma and how we share it.
Cardinal Donald Wuerl, Archbishop of Washington