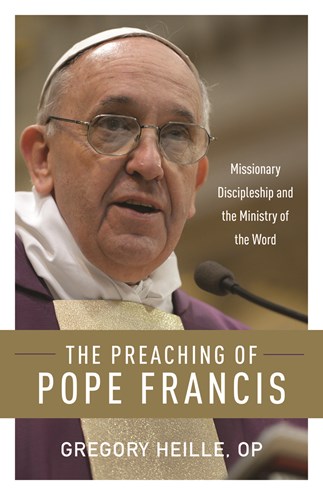 The Preaching of Pope Francis

Missionary Discipleship and the Ministry of the Word
Gregory Heille, OP

Since the beginning of his pontificate, Pope Francis has encouraged, inspired, and delighted those who have heard him preach. Especially fascinating have been his plain-spoken and insightful weekday morning Mass homilies. He has also offered the church a substantial contribution on the theory and practice of homiletics in a large section of his first major teaching document, Evangelii Gaudium (The Joy of the Gospel). In The Preaching of Pope Francis, Gregory Heille, OP, introduces readers to the pope's preaching, his insights about the preaching vocation of the ordained, and his call to all the baptized to go to the margins as missionary disciples and evangelists of the Word.

Heille, a highly regarded professor of homiletics and preacher himself, offers an inspiring and practical resource for priests, deacons, and anyone involved in the ministry of preaching. He shares the pope's vision and example for the preparation and delivery of effective and engaging homilies and for laity invested in the church's ministry of the Word in a post-Vatican II pastoral context.

Gregory Heille, OP, professor of homiletics and academic dean at Aquinas Institute of Theology in St. Louis, has spoken and given workshops on preaching in the United States, Canada, England, Ireland, and Australia. He serves as promoter of preaching for the Dominican Central Province and has served as president of the Catholic Association of Teachers of Homiletics and president of the Academy of Homiletics.

Fr. Gregory Heille's poetic and personal book is an act of love for a master preacher that convincingly shows how Pope Francis exemplifies all that the Church has called for in the renewal of preaching. With considerable experience as a preacher and teacher of preaching, Fr. Heille links Pope Francis's homiletic practice with Church documents on preaching in this beautiful, concise and heart-felt book.
Deacon Peter Lovrick, Professor of Homiletics, St. Augustine's Seminary, Toronto


Pope Francis places emphasis on preaching as a way to form missionary disciples. As a pastor I identified with Fr. Heille's point that: `Daily preaching is a choral exercise of daily prayer supported by lifelong practices of discipleship, study, reflection, and service.' Proclaiming Good News to the poor is an essential part of the `social dimension of Evangelization.'
Msgr. Charles Kosanke, STD, Pastor, St. Regis Parish, Bloomfield Hills, Michigan, Chairman, Catholic Charities of Southeast Michigan


The joy of the Gospel and its power to transform hearts and history shine forth in Greg Heille's astute analysis of the preaching of Pope Francis. Heille's own fidelity to preaching the Word in season and out of season is clear as he highlights the call of Papa Francesco to all baptized Christians to embrace the vocation of missionary disciples.
Mary Catherine Hilkert, OP, Professor of Theology, University of Notre Dame, Author of Naming Grace: Preaching and the Sacramental Imagination


Fr. Heille's book provides a broad frame by which the student-preacher can gain substantial insights into the missionary nuance of Pope Francis' preaching style. Both the new and experienced preacher will benefit from the way each chapter weaves together illustrations of Pope Francis' homilies with good preaching theory and method. The attentive selection, reading and interpretation of the homilies that Fr. Heille offers highlight the depth and universality of Pope Francis' missionary discipleship. For those of us who may not readily label ourselves as preachers, the book gives us a rich meditation into the life of a pope who has captured our imagination.
F. Javier Orozco, Executive Director of Intercultural and Interreligious Affairs, Archdiocese of St. Louis


As informed and informative as it is inspired and inspiring, The Preaching of Pope Francis is critically important and essential reading by seminary students, Catholic priests, deacons, and lay members of the church.
The Midwest Book Review


Drawing on the pastoral actions and homilies of Pope Francis to motivate all preachers, Fr. Heille reminds us powerfully the good preacher not only practices what he preaches but also how he preaches. The "what" is the full life of following Jesus (discipleship) and the "how," a proclamation from the heart steeped in the Word of God. As he presents the "10,000 hour" rule for developing any lasting virtue, the author invites preachers to apply that rule both in the way one preaches and the way one lives a life of discipleship in a community of faith. I enjoyed reading this book, including the personal witness in the concluding chapter.
Archbishop Joseph Kurtz, President, United States Conference of Catholic Bishops


Gregory Heille, OP provides his readers with a brief, thoughtful introduction to the principle themes, textures, and tone of Pope Francis's preaching.
Homiletic