The Medicine of Mercy 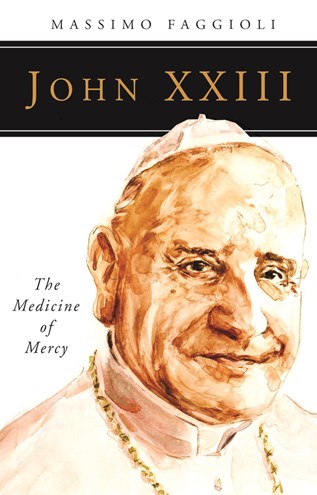 The canonization of Pope John XXIII and the fiftieth anniversary of Vatican II call for a fresh look at this remarkable man. Now highly regarded Vatican II historian Massimo Faggioli offers a rich and insightful portrait. His sources include the complete edition of the private diaries of the future John XXIII, published recently in ten volumes, much of which is unavailable in English. Faggioli's use of this treasure of personal notes of the future pope means this biography offers a more complete and nuanced understanding of Angelo Roncalli than is available anywhere else in English today. The result is both unforgettable and inspiring.

Massimo Faggioli is assistant professor of theology at the University of St. Thomas in St. Paul, Minnesota. He has written extensively on modern Church history and on Vatican II. He is the author of Vatican II: The Battle for Meaning (Paulist, 2012) and True Reform: Liturgy and Ecclesiology in Sacrosanctum Concilium (Liturgical Press 2012).

Faggioli has delved deeply into his subject and come away with a sensitive understanding of St. John XXIII as a man of his times and as an icon owned, in a sense, by the wider world. Writing this book has obviously been a labor of love for its author-one of the finest historians of modern Catholicism and one of the sharpest interpreters of the Catholicism in the today's world.
James McCartin, Center on Religion and Culture, Fordham University

John XXIII: The Medicine of Mercy is healing balm for the soul. This fine book sets forth the surprising twists and turns of a son of an Italian farmer whose "north star" always was responding with compassion and obedience to the real needs of people. Even his 20 years in "exile" in diplomatic posts in Bulgaria and Turkey became nourishment for his spiritual life. Pope John's story can lead us into our own deep listening to the Spirit among us and to imitating his consequent response to jettison fear and spread Jesus' word of inclusive joyous mercy. This can be world changing action for our time too.
Simone Campbell, SSS, Executive Director NETWORK, Washington, DC

Faggioli has produced the first biography in English based largely on the recently completed edition of Roncalli's extensive diaries. He is able therefore to trace the external events in Roncalli's life in a newly reliable way but, more important, also to reveal the pope's internal journey from a naive peasant boy into one of the world's most respected and beloved leaders. He does this with keen insight and with an admirable economy of words. The book's title, Medicine of Mercy, captures the essence of Pope John's legacy, revivified today by Pope Francis.
John O'Malley, SJ, Georgetown University

Professor Faggioli's readable account of the humble journey of Pope St. John XXIII shows what a gift to the church Roncalli was: A man of simple devotion to the liturgy and to Scripture, a man who heard and saw the signs of the times, a man whose style and substance paved the way for Pope Francis. Roncalli's motto was "obedience and peace." Faggioli shows how the saint's unwavering obedience brought him peace in very difficult circumstances and taught him that peace on earth is possible in obedient devotion to the reign of God.
Terrence W. Tilley, Avery Cardinal Dulles, S.J., Chair in Catholic Theology, Fordham University

This slim volume provides an accessible introduction to the remarkable life of Angelo Roncalli.
Theological Studies

Massimo Faggioli's superb new biography is the best short introduction to John XXIII around. Concise, well-researched and beautifully written, it is the perfect invitation to come to know the remarkable saint who invited some fresh air into the Catholic church.
James Martin, SJ, author of My Life with the Saints

Faggioli covers the whole span of Angelo Giuseppe Roncalli's long life, giving equal attention to each phase of his development. Though short, his book is not in the least superficial. Faggioli had access to much recently published material from the pope's diaries, and he has succeeded in producing a work that is at once appealing and learned. Not a word is wasted.
Paul Lakeland, Commonweal