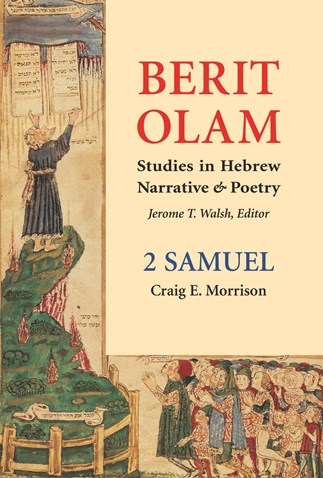 King David ranks among the most intriguing persons in the Hebrew Bible. The Second Book of Samuel tells the story of David's kingship-his public successes and his private foibles. The narrator's rehearsal of this story, as questioning as it is vivid, glimpses the secrets of David's heart.

In this commentary, Craig E. Morrison focuses on the aesthetics of the "art of the telling": how does the narrator succeed in breathing life into his portrait of David? How does he draw the reader into his story? This commentary is intended to accompany the reader's encounter with this ancient masterpiece so that one might cheer with David as he dances before the ark of God and weep with him as he grieves the death of his rebel son Absalom.

Craig E. Morrison, OCarm, teaches Aramaic and biblical exegesis at the Pontifical Biblical Institute in Rome. Among his interests are an appreciation of the art of Hebrew narrative and lectio divina. He has written for The Bible Today, Word Among Us, The Catholic Biblical Quarterly, and other scholarly journals.

"A teacher of Aramaic and biblical exegesis at the Pontifical Biblical Institute in Rome, Craig Morrison, O Carm, explores in this work the intriguing character of King David as he draws the reader into the heart of this ancient masterpiece."
Mount Carmel


"It is not often that one comes across a commentary so rich in exegetical insight despite so little attention given to other contemporary scholarship. Consistent with the stated aim of the Berit Olam series, Morrison prioritizes the final form of the text and approaches 2 Samuel as primarily a work of artistic storytelling, as literature directly comparable to Shakespeare and Austen, Homer and Dickens."
James E. Patrick, Theological Studies


"Morrison's 2 Samuel makes a wonderful addition to the Berit Olam series. He demonstrates considerable literary sensitivity in discussing a book as rich as biblical prose narrative gets. The series' specialization in Hebrew narrative and poetry is thus well met."
Barbara Green, OP, The Catholic Biblical Quarterly