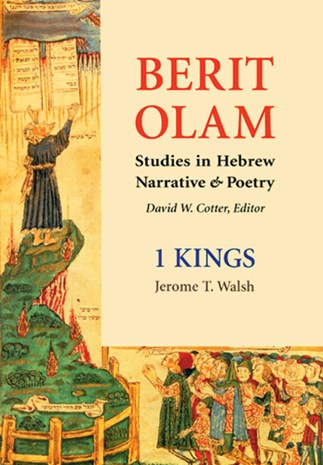 The narratives of Solomon and Jeroboam, of Elijah and Ahab, have fascinated readers for millennia. Even apart from questions of historical authenticity, they are gripping stories of richly drawn characters caught up in the complex tale of God's dealings with Israel. This study explores the narrative world created by 1 Kings' ancient Israelite author: the people who inhabit it, the lives they live, the deeds they do, and the face of God who is revealed in their stories.

An introduction explains the significance of 1 Kings as a historical narrative. Originally intended as a literal history, after centuries of writing and rewriting it is now as much a literary work as a historical one: The views of those who formed it can be discerned and studied. Walsh also explains how the rich traditions of Hebrew prose narrative and the Hebrew language itself affect our reading of 1 Kings.

Jerome T. Walsh held advanced degrees in theology from the University of Louvain, in Sacred Scripture from the Pontifical Biblical Institute in Rome, and a PhD in Near Eastern languages and literature from the University of Michigan. He has contributed to such reference works as The New Jerome Biblical Commentary and The Anchor Bible Dictionary, and he frequently published articles and reviews in professional journals of biblical studies. He was a member of the Catholic Biblical Association of America, where he was collaborating on the second edition of the New American Bible translation of the Old Testament. He was a priest of the Archdiocese of Detroit.

. . . thorough and even exciting. The scholarship and the research are impressive.
The Priest

These new commentaries should be very helpful for both translation officers and translators. Walsh pays close attention to the structure of the text but also comments on individual words and phrases, especially when showing connections between different verses in the Hebrew text which may not be clear in most translations. . . . There is no other seriesin English at leastwhich gives such careful attention to literary critical matters in reading the text.
The Bible Translator

Moving away from dry exposition, [Walsh] displays the storyteller's flair and thus draws the reader into the intricate interplay of events and characters. In so doing, he releases the narrative's power to work on its reader.
Ashland Theological Journal

. . . a good beginning for a series that promises to treat the entire Hebrew Bible from a narrative-critical perspective.
America