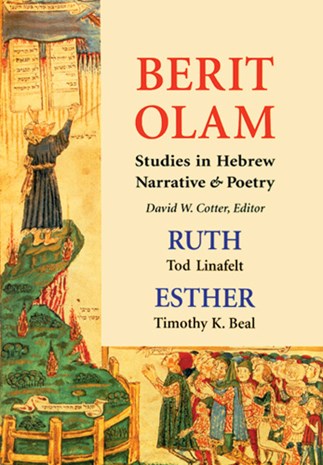 Some ancient works of literature survive in fragments that appear so simple and complete it's hard to imagine them as being part of a larger narrative. Such is the case with Ruth and Esther. On first reading they appear so simple, so whole, and their meanings so completely self-evident. Yet the closer you look, the more perplexing they become. Ruth and Esther offers that close look, enabling readers to discover the uncertainties of the texts and demonstrating how these uncertainties are not problems to be solved, but rather are integral to the narrative art of these texts.

In Ruth, the first part of this volume, Tod Linafelt highlights the most unresolved and perplexing aspects of Ruth. In doing so he offers an interpretation he calls "unsettling." Linafelt states that it is unsettling in the sense that he often refuses to "settle" on a single, unequivocal meaning of a particular word, phrase, or theme. Rather he prefers to underscore the dual or even multiple meanings that the narrative so often has. Another way Ruth differs from other interpretations is that Linafelt entertains the possibility that there might be complexity or ambiguity with regard to the various characters' motivations, the presentation of God, or the book's purpose. In this commentary, Linafelt explores the ambiguities of meaning built into the grammar, syntax, and vocabulary of the story to discover how these ambiguities carry over to the larger interpretive issues of characterization, theology, and purpose. He also lays forth an argument that the book of Ruth is intended to be read as an interlude between Judges and Samuel.

The second part of this volume focuses on Esther, a story of anti-Judaism that raises strikingly contemporary questions concerning relations between sexism, ethnocentrism, and national identity. In Esther Timothy Beal guides readers into the meaning of the story using rhetorical criticism. He asks questions without assuming that there must be answers and allows for complexity, perplexity, and the importance of accidents in the text. In essence, Beal emphasizes the particular over the general and the tentative over the continuous; however, he does not altogether dismiss the importance of broader interpretations of Esther, especially those focusing on narrative structure.

Chapters in Ruth are "The Bond between Ruth and Naomi," "Finding Favor in Boaz’s Field," "An Ambiguous Encounter in the Night," and "Making It All Legal."

. . . a new and lively interpretation of Esther which should appeal to all.
Society for Old Testament Study

The volume contributes greatly to the promise of this new series, and alerts us to future important and insightful work we may expect from these emerging scholars.
Walter Brueggemann, Columbia Theological Seminary

I highly recommend this volume as a useful resource for upper-level college and graduate students as well as for scholars.
The Catholic Biblical Quarterly

. . . this is a compelling book for anyone interested in the dynamics of human character at the boundaries of existencewhere hunger, hatred, desire, and resistance to death are worked out in enigmatic plays of truth and deceptionand where God is registered as much by absence as by presence.
Carol A. Newsom, Candler School of Theology, Emory University

Esther is an unknown book for many Christians. It has been the centre of much recent interest by feminist scholars and it could be of interest as it treats of ethnic, religious and gender discrimination.
Vidyajyoti Journal

. . . both commentaries are innovative, evocative, clear, and compelling, disturbing the conventional and traditional explanations of these books.
Gene M. Tucker