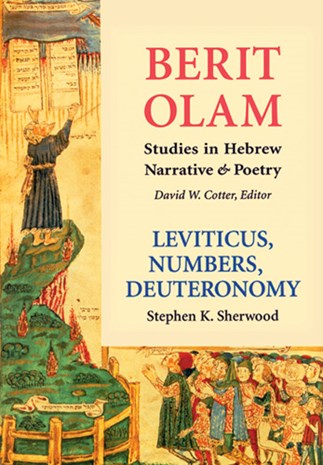 Sherwood identifies the narrative art of Leviticus, Numbers, and Deuteronomy not only in such colorful stories as the Sabbath breaker, the threat from Sihon and Og, the deaths of Nadab and Abihu, the story of Balaam, the bronze serpent, Aaron's rod, Miriam's leprosy, and the water from the rock, but also through the extended discourses made by characters in the story. Sherwood studies the voices of several of these characters: the narrator, the Lord, Moses, Aaron, the Israelites, Balaam and Barak, and others, to see how each is "characterized" by their words and actions.

In Leviticus, Numbers, Deuteronomy, Sherwood also shows how each of the three books has its own characteristics as part of a larger story. Leviticus deals mainly with divine speech. Numbers also contains divine speech but the voices of Moses and the narrator are more recurrent. Deuteronomy is presented in the form of a farewell speech of Moses before his death. The story is then retold from Moses' point of view, with different emphases and even some changes.

Chapters are "General Introduction," "Leviticus," "Numbers," and “Deuteronomy." Each chapter contains a general introduction to a biblical book which is followed by notes which make observations on the literary qualities of smaller units of each book.

Stephen K. Sherwood's commentary on the books of Leviticus, Numbers, and Deuteronomy provides a distinctive approach to the final forms of these three books of the Pentateuch.
Beverly W. Cushman, Calvin College, Grand Rapids, MI