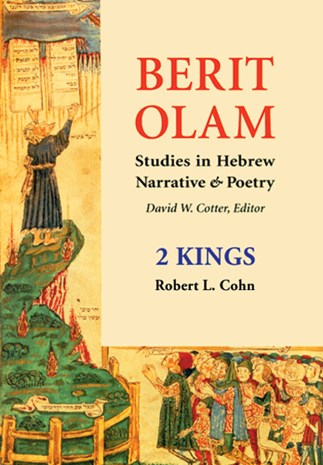 Opening with the prophet Elijah's ascent into heaven and closing with the people of Judah's descent to Babylonia, 2 Kings charts the story of the two Israelite kingdoms until their destruction. This commentary unfolds the literary dimensions of 2 Kings, analyzes the strategies through which its words create a world of meaning, and examines the book's tales of prophets, political intrigue, royal apostasy, and religious reform as components of larger patterns.

2 Kings pays attention to the writers' methods of representing human character and of twisting chronological time for literary purposes. It also shows how the contests between kings and prophets are mirrored in the competing structures of regnal synchronization and prophecy-fulfillment. Much more than a common chronicle of royal achievements and disasters, 2 Kings emerges as a powerful history that creates memories and forges identities for its Jewish readers.

Robert L. Cohn is professor of religion and holds the Philip and Muriel Berman Chair in Jewish studies at Lafayette College. Under the auspices of the American Jewish Committee, he lectured on Jewish interpretations of the Bible as the first American Jewish-scholar-in-residence at four Roman Catholic seminaries in Poland.

In 2 Kings, Robert Cohn, the Philip and Muriel Berman professor of Jewish Studies at Lafayette College, offers an admirably clear, jargon-free commentary on what he calls the literary dimension of history writing.' . . . He well serves general readers and professionals engaged with the Bible who will be able to make their own contemporary applications.
Hebrew Studies

Robert Cohn has written a refreshingly different commentary on 2 Kings . . . . Graced by a clear, accessible style, Cohn's 2 Kings is an exemplary demonstration of what close interpretation of a text is all about.
Peter Machinist, Hancock Professor of Hebrew and Other Oriental Languages, Harvard University

It introduces its readers into the literary richness of a text that too often has been reduced to merely a historical source.
Journal of Hebrew Scriptures

Robert Cohn is one of the most perceptive literary interpreters of biblical narrative at work today. He combines an unrivaled sense of literary artistry with a profound empathy for the religious dimension of the text. Professor Cohn's commentary on 2 Kings is a delight to read and a source of instruction and spiritual enrichment for anyone lucky enough to dip into it. I commend it with enthusiasm. There is nothing else like it."
Jon D. Levenson, Albert A. List Professor of Jewish Studies, Harvard University