The Canonical Function of Acts 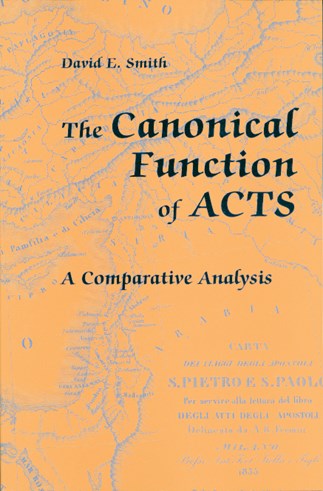 The book of Acts was recognized as canonical throughout most of the Catholic Christian world by the early third century. Its canonization was due largely to its linking of the Old Testament with the ministries of Jesus, the Jerusalem apostles, Paul, and the "bishops" of Ephesus. In this way it functioned as a unifier of the developing Biblical canon and provided justification for episcopal hermeneutical authority.

. . .an interesting and well-argued volume, which deserves the attention of all who wish to study Acts in the context of the ongoing life of the church.
The Catholic Biblical Quarterly

Smith's application and development of canonical criticism provides both an entrée to this approach and a trajectory map for future studies. No work on the Christian biblical canon can be considered thorough hereafter without reference to Smith's well-supported thesis. . . . As Smith guides his reader through the rich contours of his thesis, he also provides something of a tour of issues, ideas, key figures, and groups in early Christianity. In so doing, he enlivens church history in a way that a standard textbook survey usually cannot. This book should be part of seminary and research library holdings.
Andrew T. Dolan, Alvernia College