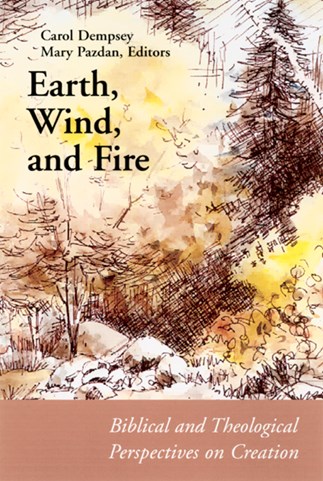 Today's world demands an integrated attitude and vision toward all of life—an approach embraced and enhanced by the contributors to Earth, Wind, and Fire. In this scholarly and passionate work members of the Feminist Hermeneutics Task Force of the Catholic Biblical Association orchestrate an approach to understanding a feminist model of creation that is faithful to biblical tradition and celebrates the rich diversity of all creation. Inviting conversation between Bible and theology, feminist scholars and theologians, the contributing writers explore themes such as the significance of embodiment, the integrity of creation, the interconnectedness of humanity with other creatures, the evolutionary nature of creation, and integral connections between creation and salvation, ecojustice and human liberation. Both detailed and holistic, Earth, Wind, and Fire is a compelling, insightful, and reader-friendly approach to the creative artistry of God.

Chapters and contributors are:

Carol J. Dempsey, OP, PhD, is associate professor of biblical studies and theology at the University of Portland. She also co-edited All Creation is Groaning: An Interdisciplinary Vision for Life in a Sacred Universe, published by Liturgical Press.

Mary Margaret Pazdan, OP, PhD, is professor of biblical studies at Aquinas Institute of Theology, St. Louis. She is the author of a commentary on the minor prophets in The Collegeville Bible Commentary, published by Liturgical Press.

This collection is a fine example of critical investigation for the sake of contemporary biblical theology.
The Bible Today


Earth, Wind, and Fire: Biblical and Theological Perspectives on Creation consists of twelve papers by experts in their fields that together provide the reader with a compelling dialogue between feminist exegetes and theologians on the subjects of creation. Common themes running through these diverse contributions concerning distinct texts in the Jewish and Christian Scriptures celebrate the biblical traditions of creation inclusive of plants, animals, non-human and human life, as well as the male and female genders. An impressive body of academic and theologic work, Earth, Wind, and Fire is a testament to the creativity artistry of god within the Judeo/Christian tradition, and highly recommended reading for both seminary students and non-specialist general readers with an interest in the Genesis story of creation as interpreted and reference in both the Old and New Testaments."
The Midwest Book Review


Indeed, this is an excellent book well worth your reading. It brings together much of the thought of the second half of the twentieth century, and creatively re-positions it for the twenty first.
Catholic Books Review


. . . this is an excellent book well worth your reading. It brings together much of the thought of the second half of the twentieth century, and creatively re-positions it for the twenty first.
Catholic Studies


The reflections of these women not only cross the established boundaries of their own disciplines, but they have intentionally engaged in creative conversations with the thought and texts of one another. This is collaborative scholarship in the best sense of the word.
Catholic Biblical Quarterly