Marriage and the Catholic Church 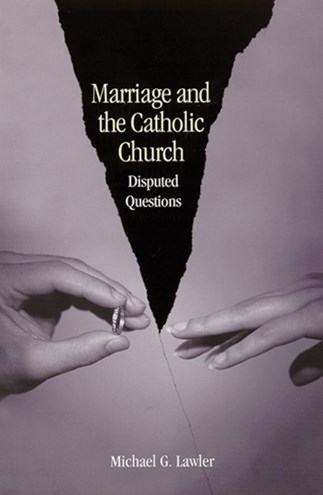 It is an open secret that marriage is in crisis in the United States and that the marriages of Catholics are not significantly different from other marriages. In Marriage and the Catholic Church Michael Lawler confronts the difficult questions in the Catholic theology of marriage.

Lawler, among the leading Catholic voices on the theology of marriage, does not shy away from the difficult questions, but confronts them honestly, historically accurately, and pastorally. He highlights a Catholic approach to premarital relationships, to marriage, to divorce, and to remarriage. He examines the relationship of marriage and sacrament, faith and sacrament, friendship in marriage, divorce and remarriage, cohabitation, family, interchurch marriages, and the changing models of marriage in the Catholic tradition. The whole offers a fresh look at the Catholic theology of marriage for a new millennium.

Chapter 1 looks at marriage as a sacrament. Chapter 2 then asks what models of marriage function in the contemporary Catholic Church. Chapter 3 considers what it takes to transform the social reality of marriage into the Catholic sacrament and answers that it takes personal faith. Lawler looks into the bonds or relationships in marriage in Chapter 4. He offers an extended consideration of divorce and remarriage in the Catholic Church in Chapter 5. In Chapter 6 he offers theological and pastoral reflections on interchurch marriage. He analyzes the Christian reality and value of friendship and reflects on its contribution to the stability of marriage in Chapter 7. Lawler inquires, in Chapter 8, whether cohabitation could, again as in the past, be counted as a step in the process of becoming married in the Catholic tradition. Finally in Chapter 9 he seeks to construct a theology of Christian family and reflects on what that theology, and the families rooted in it, can contribute to American families in their present crisis.

Michael G. Lawler, PhD, is the Amelia B. and Emil G. Graff Chair in Catholic Theological Studies and Dean Emeritus of the Graduate School at Creighton University in Omaha, Nebraska. He directs the Center for Marriage and Family, whose studies of marriage preparation, interchurch marriages, and the first five years of marriage have gained international acclaim.

Marriage and the Catholic Church is a refreshing text on marriage. Lawler never shies away from the difficult issues, e.g., cohabitation, divorce and remarriage, what makes a marriage a sacrament. His positions are well grounded historically and theologically. Above all else, this text has a keen pastoral sensitivity and honesty and will surely stimulate helpful pastoral discussions and criticisms. We need a text like this to become more deeply engaged in the great challenge facing marriage in the world and the church.
George Worgul, Duquesne University

The book is well suited for use by pastors, marriage preparation teams, and university or seminary teachers of sacramental theology, marriage, and canon law. . . . Lawler's book is yet another worthwhile contribution to the burgeoning field of Catholic scholarly writing on marriage and family life as intensely social realities that ought to be oriented to the common good and to ever widening circles of solidarity.
The National Catholic Bioethics Quarterly

Lawler's scholarship is extensive, engaging, and will challenge the thoughtful reader. He integrates culture, history, theology, and church teaching in such a way as to cast new light on certain questions and even to raise new ones.
H. Richard McCord, Executive Director, Committee on Marriage and Family, U.S. Conference of Catholic Bishops

This book is surely required reading for all who teach and work in the field of marriage in the Church today and all those who want to enrich the spirituality of their own unions.
INTAMS review

This is a wonderful book. It should help us ethicists think more sacramentallyand therefore more helpfullyabout what marriage is and how our church can support it.
Worship

In dealing with some of the more challenging issues like cohabitation, interchurch marriage, divorce and remarriage, Lawler poses the key questions that Church leadership will sooner or later have to face and resolve. . . . In short, this is a masterful work by probably the most respected Catholic theologian of marriage in America today. I would recommend this text to theology students, adult Catholics interested in these issues or involved in marriage preparation programs, but especially to those working in diocesan marriage tribunals and to their bishops.
Ray R. Noll, Professor of Theology, University of San Francisco

Lawler's lifes work has prodded the Catholic ecclesial community to let theology of marriage be informed by experiential wisdom of Christians who are living this vocation . . . provides a rich portrait of where Catholic theology of marriage has been in the past few decades, and where it is headed in decades to come.
Theological Studies