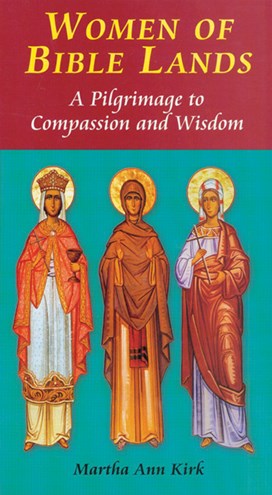 A Pilgrimage to Compassion and Wisdom
Martha Ann Kirk, CCVI

Women of Bible Lands is an anthology of biblical and early stories about Jewish, Christian, and Muslim women from the nineteenth century B.C.E. to the ninth century C.E. Ancient words and journeys strengthen modern readers for a challenging pilgrimage from the head to the heart as they travel in spirit through the Holy Land to Greece, Turkey, and North Africa. Kirk's book, which is the first guide book to biblical sites associated with women, not only fills a void, but does so in an inspirational and imaginative way.

Part One: Reclaiming Women’s Stories and Journeys discusses the types of women that have been remembered in the Christian tradition and examines the scarcity of women’s writings and the possibilities of women’s oral tradition within the Bible and other early sources. Chapters in Part One are: "Shards and Stories," “’As a Mother Hen Gathers Her Brood Under Her Wings,’” “The Pilgrimage to the Womb of Compassion,” “Seeking the True Cross, Seeking the True Helena,” “Ascetic Life, an Inner Journey; Paula and Egeria, Their Outer and Inner Journeys,” and “Guides for Reading.”

Part Two: Stories, Sites, and Maps includes introductions to the sites, maps, information about or by women or female images of God, and selections from the Bible or an early Hebrew, Greek, Latin, Coptic, Syriac, or Arabic text. Chapters in Part Two are: “The Old City of Jerusalem,” “Other Sites in Jerusalem,” “Sites in Israel and Palestine,” “Sinai, Egypt, and Tunisia,” “Iran, Iraq, Jordan,” “Lebanon and Syria,” “Greece and the Mediterranean Islands,” and “Turkey.”

Martha Ann Kirk, CCVI, ThD, is professor of religious studies at the University of the Incarnate Word in San Antonio, Texas, and a recent recipient of the Texas Pax Christi 2005 award. She led several study tours to the Holy Land and was a research scholar at Tantur Ecumenical Institute, Jerusalem. Kirk has written entries for Worship Music published by Liturgical Press and is the author of “Liturgical Drama,” published in the Collegeville Catholic Reference Library on CD-ROM and The New Dictionary of Sacramental Worship by Liturgical Press.

Kirk has collected these tidbits like an archaeologist collects potsherds, putting them together in a way that reveals ancient times and modern places. . . . Like every good guidebook, there are also helpful maps. Clip art adds to the creative character of this exceptionally informative book. It is highly recommended.
The Bible Today


The blending of past and present, scripture and other familiar or not so well known sources, information and personal experience make for an unusual anthology that can accompany the traveler to the Holy Land or provide a unique armchair journey.
Magistra


What an invaluable compendium of women's stories! The research is extensive, informative and impressive. Let every library buy it and display it. It is a long awaited, critical resource.
Janet Walton, Union Theological Seminary


"Most of the stories of women in the Middle East, as elsewhere, are written by men, but Kirk manages to peer past thisand past denominational lines and political boundariesto discern a feminine perspective and provide stories that are instructive and inspiring. Avoiding big questions' of might and power that daily whirl in this region, Kirks reflections upon visiting the shrines and holy places in Israel and the surrounding areas are on the things that matter in Gods eyes, inviting readersmen as well as womento explore sacred stories in their own lives.
Dr. Gilberto Hinojosa, Professor of History, University of the Incarnate Word


Sr. Martha Ann Kirk adds new dimensions of sensitivity, understanding, and spiritual experience to the armchair traveler and to anyone visiting the holy lands for the first or the hundredth time. By allowing the reader into the religious world of women of faith, both ancient and modern, who trod on those same paths, Sr. Kirk helps today's visitors perceive the human spirit bounding upwards from those ancient stones and thereby enrich their own pilgrimages.
Rabbi Jeremy Milgrom


With her new book, Martha Ann Kirk shows herself to be a wonderfully imaginative and resourceful guide to the lives of women in Bible lands. Kirk maps these lives, both past and present, in ways that enable the reader to see all the richness, diversity, and faith of these women. Our own life journeys, whether in Bible lands or on interior pilgrimages, will become the richer for this map and for the many women companions Kirk reveals to us.
Teresa Berger, Professor, Divinity School, Duke University


Whether tucked in one's bag on a dig or pilgrimage, or read as a collection of stories about women in the Middle East, this creative resource is very useful for those seeking women's place and insight in the sacred dramas. A thorough index and suggestions for prayer made this more than a good guide-indeed, a good companion.
WATERwheel


Women of Bible Lands is a delightful anthology of memorable ancient women presented through the lens of place, from Persia to Tunisia. The inclusion not only of biblical women and significant women of the early church, but also of later Byzantine and Muslim women, gives the book a fullness that most such collections lack. For those who have been there, the descriptions will evoke many reminiscences. For those who have not, they will invite exploration. Kirk's analogy of the People of the Book, the three great religions of the area, as adolescents fighting each other for turf and slowly maturing toward mutual acceptance offers a ray of hope for greater cooperation in those troubled lands through the power of women to reconcile and heal.
Carolyn Osiek, Professor of New Testament, Brite Divinity School, Fort Worth, Texas


A fascinating book, this is a pilgrimage to sites in the Mediterranean world that are mentioned in the Bible and other early literaturebut through the experiences of Jewish, Christian and Muslim women. Readers will find here a devotional, a taste of the history of early women of faith, and a useful tool for Bible study.
St. Placid Priory


Martha Ann Kirk has given us a new and greatly expanded view of the Bible and early Christian history. Commenting that the stories of women were told largely by men, she helps us to probe behind these stories and recover the experiences and feelings of one half of humanity. To that end she provides stories of both well known and little known women plus questions that are rarely asked. This work leads to an understanding of the relation between these ancient women and today's women but it also adds material for groups to discuss and individuals to meditate on. Bible Lands is defined broadly and the early monastics, church leaders, martyrs and royalty come from places well beyond our traditional ideas of Bible lands. I have a galley proof now and I will keep it handy until the book is published. It is too valuable to set aside.
Reverend Dr. Betty Jane Bailey


With maps, woodcut-style graphics, footnotes and an extensive bibliography, Women of Bible Lands: A Pilgrimage to Compassion and Wisdom is a pilgrimage well worth taking.
Today's Catholic


Kirk's study is an informative catalogue that makes available the profile of countless women who lived in biblical times. Her approach is novel, and her material is a real treasure and contribution to biblical literature, especially for those interested in gender and women's studies.
Catholic Books Review


Martha Ann Kirk spreads a rich feast of women's hidden histories, situated in their original geographic contexts. Much as the fourth-century pilgrim Egeria journeyed to the Bible Lands and carefully described for her sisters what she had seen and experienced, Kirk weaves a colorful tapestry of Mediterranean cities and cultures as a backdrop for numerous accounts and legends not only of Christian but of Jewish and Muslim women as well. Her stories and descriptions are illuminated by a depth of understanding, solid scholarly research, attentive awareness to the particularities of women's lives in ancient patriarchal societies and a passionate commitment to retrieving their stories from obscurity. This book would serve as a fine companion for a contemporary pilgrim in the lands of the Scriptures, and a rewarding excursion for the armchair traveler.
Susan K. Roll, Associate Professor of Theology, Saint Paul University, Ottawa, Cana da


What a treasure Martha Kirk has assembled! Forgotten stories, lost memories, sacred places, holy livesall witnessing to the gift of faithful women in the biblical lands. This treasure is an essential companion for both the intrepid traveler and the armchair pilgrim who journey in the biblical lands from Iran, Iraq and the Syrian orient in the east, westward throughout the Mediterranean world.
Barbara E. Bowe, RSCJ, Professor of New Testament, Catholic Theological Union