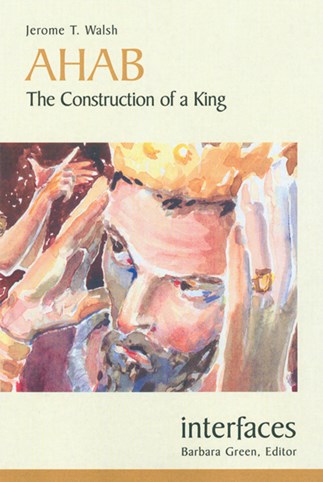 The Construction of a King
Jerome T. Walsh

Ahab, king of Israel during the ninth century B.C.E., "did evil in the sight of the Lord more than of his predecessors" and "did more to anger the Lord, the God of Israel, than any of the kings of Israel before him" (1 Kings 16:30, 33). With this less-than-flattering introduction, modern readers meet Ahab. And that first impression is only underscored in the remaining biblical account of the notorious king’s reign.

In Ahab: The Construction of a King, Walsh sheds new, if not always more positive, light on this character. He begins by pointing out that the historical Ahab, insofar as we can retrieve him, seems to have been a stabilizing and successful political leader. Walsh then uses narrative criticism to examine more closely how the biblical text paints its generally negative portrait of Ahab.

Finally, Walsh uses source and redaction criticism to trace how the king’s positive image might have been transformed into the negative one we encounter in the text. In the end, Walsh leads readers to a greater appreciation for both the richness of the biblical text and the complexity of the truths contained therein.

Jerome T. Walsh, SSL, PhD, is editor of the series Berit Olam: Studies in Hebrew Narrative and Poetry. He is author of 1 Kings in that series (Liturgical Press, 1996). More recently Walsh authored Style and Structure in Biblical Hebrew Narrative (Liturgical Press, 2001). He is a member of the Society of Biblical Literature and of the Catholic Biblical Association of America, and currently holds the Tschoepe Chair of Homiletics in the Institute for Religious and Pastoral Studies of the University of Dallas.

Jerome Walsh demonstrates and teaches both critical investigation and such staple methods of biblical scholarship as source, textual, redactional, and narrative criticism, with such skill and artfulness that the exercise becomes a page-turning adventure. With the example of the story and character of Ahab, Walsh shows that ancient texts are multi-layered, charged with nuanced meanings, and inexhaustibly rich. A marvelous achievement.
Dr. Johanna Stiebert, University of Tennessee, Knoxville, Tennessee


While this book should serve its intended primary audience admirably as a fully exemplified pathway into the main methods of biblical criticism, there are also sufficient fresh observations included to make this a book which more advanced scholars of this material will also need to consult.
Journal for the Study of the New Testament


This is a valuable book with which to teach college students and non-biblical specialists the strategic value to listen to the text.
The Bible and Critical Theory


This is a well-thought-through study of a very interesting biblical character. It will delight those interested in various interpretive approaches and the relationships between them.
The Bible Today


Walsh's work is a logical step for learning about methods of biblical study and their application to texts related to Ahab.
Catholic Studies


This book can serve as an accessible introduction to narrative criticism and historical criticism for college and seminary students, since it is methodologically self-conscious and able to show the dramatically different results that come from these methods.
Review of Biblical Literature


Jerome Walsh offers an understandable, unpretentious, and lucid guide through the complex texts about Ahab. He unravels the interplay of the separate tasks of literary reading and historical reading, never confusing these two distinct pursuits but demonstrating how they ask different questions of the same convoluted text in order to seek out different sorts of meaning. This results in divergent portraits of Ahab as a moderately successful king whose memory was darkened through later theological and literary developments into an apostate and unjust tyrant.
Richard D. Nelson, Perkins School of Theology, Southern Methodist University, Dallas, Texas