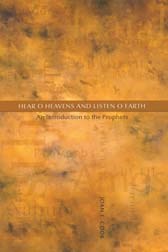 An Introduction to the Prophets
Joan E. Cook

In Hear, O Heavens and Listen, O Earth, Joan E. Cook guides students of theology, Scripture, and ministry in reading the prophetic books according to the current methodologies for biblical study. She encourages readers to apply the messages of the prophets to contemporary religious and social concerns.

Cook focuses on how to read the Old Testament books of the prophets and addresses the pastoral implications. The study proceeds chronologically and biblical quotations and references are based on the New Revised Standard Version of the Bible.

Cook encourages students to engage the biblical text and suggests points for reflection and questions for thought and action based on each of the prophetic books.

Joan E. Cook, SC, teaches Scripture at Georgetown University. She is the author of Hannah's Desire, God's Design: Early Interpretation of the Story of Hannah as well as numerous articles on biblical women and biblical prayer.

[C]learly written and engaging. Its strength lies in its literary analysis of selected prophetic texts.
Horizons


[T]he volume's accessible style, engagement with most current scholarly trends, and reflection on the contemporary and liturgical significance of the texts, especially within the Catholic tradition, make it highly recommended for library collections and classroom use.
Religious Studies Review


. . . provides an extensive introduction to Israel's prophetic literature, and comments on the significance that the prophetic texts have for daily life today.
Old Testament Abstracts


Although the Israelite prophets lived and spoke centuries ago, their message still resonates with us in the twenty-first century. Author Sister Jean Cook SC captures the essence of these prophetic messages in Hear, O Heavens and Listen, O Earth: An Introduction to the Prophets. . . . she considerers how prophetic messages speak to the religious, pastoral and socioeconomic concerns of our times.
Crux


Cook's volume is clear and engaging. . . . succeeds in offering to advanced undergraduate and ministerial students an introduction to the rich literary fabric of the prophetic texts, and invites further conversation.
Interpretation


Sister Cook provides a unique and appropriate summation for each of the prophets in which she refers to the prophets in the Christian Lectionary and shows relevance of the prophets to the current world. This is a fine example of biblical pedagogy and will be used as a handy textbook for classes on the Old Testament Prophet.
Catholic Library World


This text has much to offer individuals and groups who simply wish to learn more about the prophets.
WritingWorks


Cook has produced an excellent book on prophets, suitable for `graduate and advanced undergraduate students in theology and ministerial programs.'
Catholic Studies


Hear, O Heavens and Listen, O Earth is extremely readable and accessible, further underlying the importance of reading the ancient prophets in our modern context.
The Biblical Storyteller