An Alternative Response to World Violence 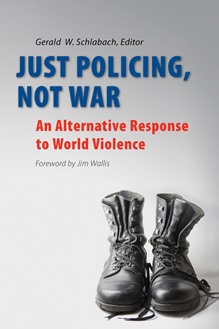 For decades, the Catholic Church and historical peace churches such as the Mennonites have come together in ecumenical discussions about war and peace. The dividing point has always been between pacifism, the view held by Mennonites and other peace churches, and the just war theory that dominates Catholic thinking on the issue. Given the transformation of global relations over this period’increased interdependency and communication as well as the fall of the Soviet Union, emerging nationalism movements, and the slow development of international courts’the time is right to rethink the Christian response to war.

Gerald Schlabach has proposed just policing theory as a way to narrow the gap between just war and pacifist traditions. If the world can address problems of violence through a police model instead of a conventional military model, there may be a role for Christians from all traditions. In this volume, Schlabach presents his theory and has invited a number of scholars representing Catholic, Mennonite, and other traditions to respond to the theory and address a number of key questions:

This important volume offers a fresh and meaningful discussion to help Christians of all traditions navigate the difficult questions of how to live in these times of violence and war.

Gerald W. Schlabach, PhD, is associate professor of theology at the University of St. Thomas in St. Paul, Minnesota, where he teaches courses in social ethics and Christian morality. He has written on topics ranging from peace, social justice, and nonviolence to Augustinian thought, Benedictine spirituality, and the Eucharist.

Jane Jacobs, prohibition, and the chaos created by military intrusions in Iraq all remind us that policing can only work when a relatively coherent `relationality' renders disruptive elements marginal. These essays draw on two complementary sets of religious practices to suggest how an international police action could be shaped as an effective alternative to the invariably counter-productive imposing a `military solution,' so allowing political and ecclesial analyses to converge towards imagining fresh forms of order.
David Burrell, C.S.C., Hesburgh Professor in Philosophy and Theology, University of Notre Dame

The authors thoughtfully present the concept of just policing in a manner that gives reason to hope that such an approach might, if adopted, improve our world.
Catholic Studies

What makes us uncomfortable intellectually as well as practically is usually something that challenges our way of understanding and acting. The uncomfortable feeling is often an indication that creativity is at work in a way that makes us look at what we have ignored. Just Policing, Not War, makes me uncomfortable as a pacifist. But perhaps it is in the creative challenging even of what is dear to me-pacifism-that something new and wonderful can be born. The book is eminently worthwhile precisely in its challenge to the just war and the pacifist traditions.
Rene McGraw

In proposing the concept of `just policing,' this book breaks new ground in the long discussion between Christians committed to pacifism and those utilizing a `Just War' framework. A focus on policing rather than on war responds to the need for order in society, which both sides would agree is necessary, while at the same time exemplifying the limitations to force that the just war theory calls for. `Just Policing' also provides a fresh way to conceptualize possible responses in the current struggle against terrorism. Schlabach and his collaborators are to be commended for both their exploration of practical examples, and their underlying commitment to searching for common ground between `just war' and pacifist Christians.
Judy Zimmerman Herr, Co-Director, MCC Peace Office, Mennonite Central Committee, Akron, PA

If September 11, 2001 was murder rather than war then we desperately need an account of what just policing might look like. Which means this book is extremely important. For here we have the beginnings of an exploration of what just policing might actually entail not only theoretically but also in practice. Not only are the war/pacifism investigated, but also the institutional questions surrounding international relations as well as what the Church must be if just policing is possible are explored in these essays. I cannot recommend this book highly enough for anyone concerned with issues of war and peace.
Stanley Hauerwas, Professor of Theological Ethics, Duke University, Divinity School, Durham, North Carolina

Every seminary graduate knows that the church's three main approaches to violence have been pacifism, just war, and crusade. The latter dropped from legitimacy long ago, and since then the chief argument has been between the other two. This important book asks us to consider a new third party to the argument: policing.
Christian Century

It calls upon all of us to think again about the implications of the Gospel in a rapidly changing global context. Students of war and peace in Christian thought and practice would do well to read and ponder Just Policing, Not War.
The Mennonite Quarterly Review