Questions for the Church in Our Time 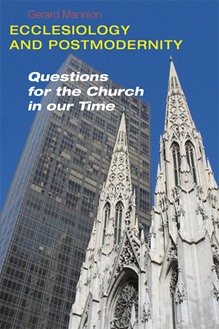 What in the world is postmodernity? Is it the dominant reality today? If it is, what does it mean to be a church in a postmodern world? It seems that the church had a difficult time coming to terms with a modern world, an era ruled by the claims of scientific certainty. Having done so, more or less, it is now confronted by the claims of postmodernity, which seem to reverse the whole equation, to say that certainty and objectivity are chimeras. "What is truth?" Pilate asked, and postmodernity’at least as caricatured by its opponents’responds: "There's no such thing."

Gerard Mannion, in Ecclesiology and Postmodernity, addresses the situation of the church in a postmodern world. The fundamental changes in human society and culture wrought by the twentieth century require the church to consider its response in the twenty-first century. What is the church's moral vision, how does its practice look, what is the nature of its aspiration toward holiness in our times? Mannion believes that since Vatican II, the Catholic Church has been in a kind of limbo, awaiting a vision of its own life for the future. Rather than focusing on specific controversies, Mannion offers concrete suggestions about how the church can create a better harmony between its own self-understanding, its ecclesiological vision, and its day-to-day life, its ecclesial practice.

Gerard Mannion, PhD, educated at King's College, Cambridge University and New College, Oxford University, is Associate Professor of Ecclesiology and Ethics in the Department of Theology and Religious Studies at Liverpool Hope University, UK. He is also the director of Church In Our Times: Centre for the Study of Contemporary Ecclesiology, co-director of the Applied Ethics Initiative at Liverpool Hope, co-chair of the AAR (American Academy of Religion) Ecclesiological Investigations Program Unit and co-ordinator of the Ecclesiological Investigations International Research Network. Mannion is the author of Schopenhauer, Religion and Morality and co-editor of Readings in Church Authority’Gifts and Challenges for Contemporary Catholicism, both published by Ashgate in 2003, and co-editor of the forthcoming volumes The Routledge Companion to the Christian Church and Catholic Social Justice: Theological and Practical Explorations.

A breath of fresh air in ecclesiology! Gerard Mannion deftly analyzes the tempestuous and toxic currents associated with postmodernity and the stifling ecclesiological responses that simply compound the problems. His alternative is to fully engage postmodernity by developing an ecclesiology that is genuinely dialogical-ecumenically, interreligiously, interculturally, and, often the most challenging, among leaders and members within the church-and thus provides the basis for a profoundly virtuous ecclesiology that forms individuals into a community of disciples with a dynamic sense of identity as witnesses, prophets, and healers in the world.
Bradford E. Hinze, Professor of Theology, Fordham University, New York

Mannion's emphasis on the importance of dialogue and love, as well as his desire for the continuance of fruitful ecumenical engagement, make him a thinker for which Protestants can be thankful. Furthermore, the breadth of his style introduces the reader to a plethora of interesting thinkers and their work, as well as to important trends within Roman Catholicism. Ecclesiology and Postmodernity would thus be a helpful text to include in a course or bibliography dealing with ecclesiology from either a Roman Catholic or a Protestant perspective.
Reviews in Religion and Theology

This book will be especially helpful and informative to those who want to keep abreast or read the history of Roman Catholic ecclesiological debates in the last several decades. For those who want to understand some of the questions that ecclesiologists as well as ecumenists are grappling with in our time, this book also provides a very good overview and is written in a commendable way, at once critical but respectful, pointed but never polemical.
Anglican Theological Review

This is a welcomed contribution to our understanding of the Church.
Catholic Library World

The creative suggestions offered in this book should encourage its readers to enrich their understanding of the interplay between faith and reason.
Horizons

The seeming ease with which Mannion integrates the thinking of such a wide array of theological minds-ancient, classical, modern and postmodern-is a credit to the author and a veritable treasure for the reader.
Connect