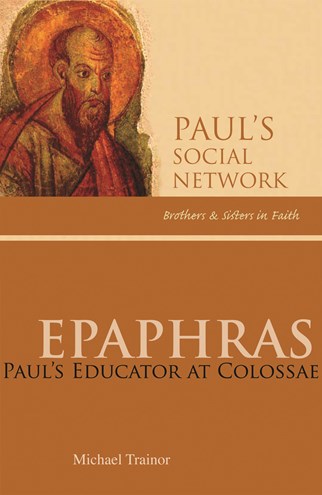 Human beings are embedded in a set of social relations. A social network is one way of conceiving that set of relations in terms of a number of persons connected to one another by varying degrees of relatedness. In the early Jesus group documents featuring Paul and coworkers, it takes little effort to envision the apostle's collection of friends and friends of friends that is the Pauline network. The persons who constituted that network are the focus of this set of brief books. For Christians of the Western tradition, these persons are significant ancestors in faith. While each of them is worth knowing by themselves, it is largely because of their standing within that web of social relations woven about and around Paul that they are of lasting interest. Through this series we hope to come to know those persons in ways befitting their first-century Mediterranean culture.

Epaphras belonged to Paul’s network of friends. Because Epaphras is mentioned only three times in the Second Testament, in the letters to Philemon and the Colossians, it is unsurprising that he is passed over by biblical scholars more interested in Paul's better-known companions. Michael Trainor points out, however, that even though Epaphras is mentioned infrequently, Colossians portrays him as an authentic interpreter of Paul and an important teacher. After all, by the time the letter to the Colossians was written, Paul was dead. Epaphras ensures for that community and the next generation of Christians the continuity, as well as the freshness and vitality, of Paul's teaching. Thus Epaphras has great relevance for Christians today who seek ways to engage the contemporary world in light of their discipleship.

Michael Trainor teaches at the Adelaide College of Divinity, in the School of Theology, Flinders University, South Australia. He has published widely in areas of theology, education, and Scripture. His most recent book with Liturgical Press was The Quest for Home: The Household in Mark's Gospel (2001). His interest in Epaphras comes out of his current research with colleagues in Australia and Turkey to interpret archaeologically the site of ancient Colossae in southern Turkey.

Complementing his archaeological work at Colossae, Michael Trainor here makes skillful use of insights from sociology and cultural anthropology to cull a remarkable amount of information concerning Paul's trusted co-worker Epaphras and the network of churches that he founded and served in the Lycus Valley. While accessible and rewarding for Bible study-groups in contemporary parish communities, this study also offers a reliable-and I believe unique-resource for scholars on a neglected but significant early Christian leader.
Brendan Byrne, SJ, Professor of New Testament, Jesuit Theological College, Parkville (Victoria), Australia

This new series of books is a welcome and promising initiative. While Paul still continues to attract scholars' attention, his closest collaborators, friends, and relations remain all too often in the dark or are dealt with only incidentally. Yet giving proper consideration to Paul's web of social relations can help us understand the Apostle himself and his legacy.
God's Word Today

Trainor's little book makes an elusive character, mentioned only three times in the New Testament, come to life. Through careful word study he unlocks layers of meaning, and presents sociological and anthropological models in easily comprehensible language. The use of network analysis enables the social networks implied in the Letters to Philemon and the Colossians to be so illustrated that it actually gives us something of a commentary on the two Letters. Trainor effectively maintains the balancing act between various positions on Pauline authorship. This study also illustrates some of the breadth of the Lycus Valley project at Flinders University, that is not confined to archaeology but expands to include all possible aspects of ancient life there.
Carolyn Osiek, Professor of New Testament, Brite Divinity School, Fort Worth, Texas