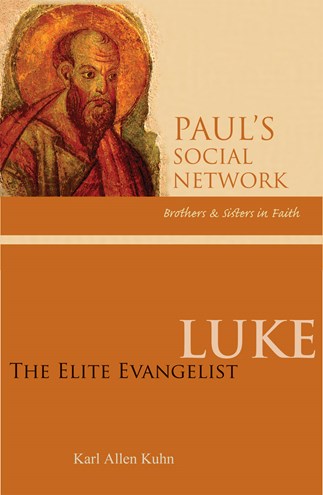 Human beings are embedded in a set of social relations. A social network is one way of conceiving that set of relations in terms of a number of persons connected to one another by varying degrees of relatedness. In the early Jesus group documents featuring Paul and coworkers, it takes little effort to envision the apostle's collection of friends and friends of friends that is the Pauline network. The persons who constituted that network are the focus of this set of books. For Christians of the Western tradition, these persons are significant ancestors in faith. While each of them is worth knowing by themselves, it is largely because of their standing within that web of social relations woven about and around Paul that they are of lasting interest. Through this series we hope to come to know those persons in ways befitting their first-century Mediterranean culture.

What can we discover about the author of the third gospel and Acts, the companion of Paul whom tradition names Luke? How might that enable us to better appreciate the writings he produced that comprise roughly a quarter of the New Testament? Using literacy in the Greco-Roman world and Luke's advanced literary acumen as his primary clues, Karl Allen Kuhn argues that the evangelist was a member of the social elite. Social scientific models tell us that as an elite, Luke would have benefited from a highly stratified social and economic hierarchy that ensured the flow of wealth and resources to a few at the expense of the many. And yet, Kuhn argues, scene after scene of Luke's narrative challenge the stratified world shaped by Rome, calling its readers to embrace a new Kingdom and a new Lord. Writing to the "most excellent Theophilus," Luke calls upon his fellow elites to join him in leaving behind the world that has given them so much and to devote themselves not to the Emperor but to the true Savior of humankind.

Karl Allen Kuhn is associate professor of religion at Lakeland College in Sheboygan, Wisconsin. He is the author of numerous articles on Luke and biblical interpretation, and coauthor of the Lectionary commentary New Proclamation, Year C, 2010. His books include Having Words with God: The Bible as Conversation and The Heart of Biblical Narrative: Rediscovering Biblical Appeal to the Emotions.

Karl Kuhn has written an informative and accessible account of the revolutionary nature of Luke's life and work. Combining a discussion of Luke's literary sophistication with background on contemporary literacy levels and social stratification, Kuhn shows that Luke addressed his gospel and Acts to fellow members of the Greco-Roman elite. Luke challenged them to imitate his own radical choice: to give up a life of privilege and power and embrace Jesus' vision of a peaceful Kingdom in which all-rich and poor, elite and non-elite-share a common life and a common status.
Martin Albl
Associate Professor of Religious Studies
Presentation College
Aberdeen, South Dakota

This is a well-informed and creative reflection on a major author of the New Testament writings.
The Bible Today

Karl Kuhn's book on Luke allows readers to appreciate the author and his work. Kuhn provides a portrait of an elite person well studied in Israel's traditions who is willing and able to venture a meaning of those traditions in light of the radical conviction that Jesus and the earliest followers were continuing to unveil God's news. Luke's literacy, artistry, and even his risk taking are especially enhanced by Kuhn's appreciation for the context of similar authors.
Kenneth G. Stenstrup, PhD
Assistant Professor of Theology
Saint Mary's University, Minnesota