A Companion to Julian of Norwich 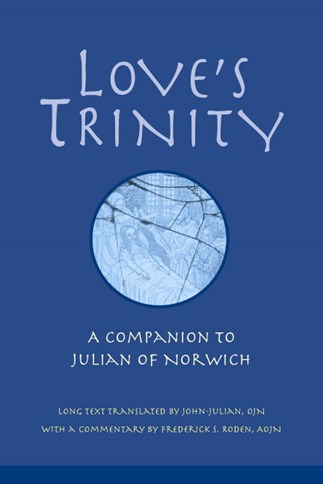 In the year 1373 a young Englishwoman whose name we do not know’she is called "Julian" because she lived part of her life as an enclosed solitary in the church of St. Julian in Norwich’experienced a series of intense visions that she later recorded in two versions. The formal title of the "long text" of that book is A Revelation of Love. It is commonly called Showings, the word Julian herself used to describe her visions.

This edition incorporates the long text of the Showings, as translated by Father John-Julian, and a commentary written by Frederick S. Roden. A lay affiliate member of the Order of Julian of Norwich, Roden gives us a companion that is reflective yet learned. It is designed to draw the reader more fully into an understanding and experience of what Julian tells us she saw and heard. In the text and commentary we begin to comprehend the truth Julian summarizes at the end of the Showings: "Love was His meaning."

Frederick S. Roden, PhD, AOJN, is associate professor of English at the University of Connecticut and an associate of the Episcopal Order of Julian of Norwich. He is the author and editor of scholarly books, articles, and reviews concerning religion, gender, and culture.

John-Julian, OJN, is an Episcopal priest who in 1985 founded the Order of Julian of Norwich, a contemplative monastic order of the Episcopal Church that includes both monks and nuns under the same traditional vows and with equal status. His translation A Lesson of Love: The Revelation of Julian of Norwich was first published in 1989 with a second edition in 2003.

Whether or not intentional, the arrangement invites a lectio divina, a pondering of the word that it may take flesh within one's mind and heart. . . . [T]he commentary is as challenging and uplifting as the translation, and merits a careful reading.
Theological Studies

This unique approach to Julian's book, in which the full text is interleaved with commentary, becomes a profound and moving journey which explores not only Julian's revelations, but reaches deep into the troubled heart of our own twenty first century. This is a book at once accessible and profound-one which will repay unhurried contemplation and which will yield its treasures slowly over the months and years.
Sheila Upjohn, Author of In Search of Julian of Norwich

Every chapter of Julian's work and every significant aspect of her spiritual insight is noted, expanded upon, and illuminated here.
Catholic Library World

This is a beautifully produced paperback in which two people whose lives have been profoundly influenced by Julian make her more accessible to others who are open to that possibility for themselves.
The Furrow

In Love's Trinity Fred Roden has given us something I have longed to see in print for years-a reflection on Julian that follows Julian's story, chapter by chapter, instead of forcing her Revelations of Divine Love into an abstract system of theology. Only in reading the Revelations in this way, following Julian's own narrative, can we fully appreciate her struggle to understand what she experienced of God and savor the spiritual meaning flowing abundantly from her experience into our own. Skillfully applying his training as a professor of literature, Roden interweaves Julian's voice with his voice, proving himself a most helpful guide for anyone seeking a deeper understanding of Julian's experience and the meaning of her Revelations for our world.
The Rev. Gregory Fruehwirth, OJN, Guardian, The Order of Julian of Norwich

How good it is to have a translation of the Showings of Julian of Norwich from somebody who obviously is very familiar with the text and for whom the text is a much loved, valued, and prized friend, and this coupled with a scholarly, readable, and devotional commentary from a person who seems to live and breathe Julian and who has a really good understanding of the Showings given her by the Lord. And all this under one cover! This book is a very welcome addition to current Julian writings and will be much valued by all who are seeking to draw closer to the Lord Jesus, and who find their inspiration and hope in the writings of Julian of Norwich.
Fr. Martin Smith SSC, Rector of The Julian Shrine, Norwich UK

"Love's Trinity" offers to twenty-first century men and women a renewed sense of hope at a time when the human race seems faced with the stark choice between spiritual evolution or annihilation. In one volume we have exquisite translation of Julian's original text by Fr. John-Julian, the founder of the order of Julian of Norwich, and a remarkable commentary by Frederick Roden. Dr. Roden is a fine scholar but he is also clearly a devoted Julian lover. His reflections demonstrate both his scholarship and his love and the result is a commentary which not only does justice to Julian's often complex and challenging theology but also has the power to inspire and to bring the reader closer to God.
Lay Canon Professor Brian Thorne, Chairman of the Trustees of the Friends of Julian of Norwich

"Love's Trinity", a unique commentary on Julian's Showings, opens up her long text historically, theologically, prayerfully, chapter by chapter. I unreservedly recommend this book, obviously written by one who has pondered on Julian and her teaching over many years and wants to make her insights available to the people of today. A book to treasure and return to again and again.
Sr. Elizabeth Ruth Obbard, O Carm, Aylesford Priory, England

Since the 600th anniversary in 1973 of the day when the 14th century English mystic, Julian, received sixteen `showings' centred on the crucified Christ, there have been numerous translations of the book in which she recorded their meaning. Now Fr. John Julian-founder of the Order of Julian of Norwich-gives us a new translation, born from decades of meditation on her theology, which by the quality of its scholarship and the clarity of its layout makes her message wonderfully accessible. This accessibility is reinforced here with Commentaries by Frederick Roden-an Associate of the Order-following each chapter of the mystic's writing. These have a depth of insight which is often moving, totally relevant to our lives, and frequently gently challenging.
Michael McLean, Retired Canon of Norwich Cathedral, Former Rector of St. Julian's