The Vision of John Paul II

Assessing His Thought and Influence 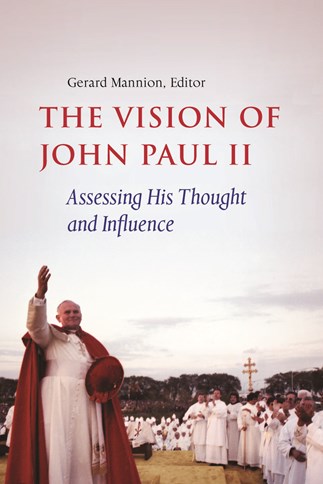 The Vision of John Paul II assesses the writings, work, and ecclesial Vision of this long-serving pontiff. Moving beyond the scope of so many other books on John Paul II, this volume seeks to fill a gap by focusing on his lasting influence on pressing issues facing the church today: social justice, women's roles, collegiality, ecumenism, and interreligious dialogue. Readers will appreciate the contributions of internationally known and respected scholars:

This accessibly written volume allows readers to engage with a variety of viewpoints and to understand the ways in which the legacy of John Paul II continues to impact today's church.

Gerard Mannion serves as chair of the Ecclesiological Investigations International Research Network and is presently a Visiting Senior Fellow of the Katholieke Universiteit Leuven in Belgium. The founding director of the Centre for the Study of Contemporary Ecclesiology, he is also cochair of the Ecclesiology Program Group of the American Academy of Religion. His most recent publications include Ecclesiology and Postmodernity: Questions for the Church in Our Time (Liturgical Press, 2007) and The Routledge Companion to the Christian Church (2007, ed. with Lewis Mudge).

Pope John Paul II was a towering figure in contemporary Catholicism. His was the second longest pontificate in the history of the church and it may prove to be one of the most influential. He wrote more encyclicals, canonized more saints, and visited more countries than any other pope in history. John Paul II's ambitious papacy left a mark on the church sure to endure for decades to come. It is precisely the breadth of his contributions that has made any comprehensive assessment of this pontificate so difficult. Yet Gerard Mannion and a team of internationally renowned scholars have responded admirably to the need for a clear-headed guide into the thought and enduring influence of John Paul II. They offer us a volume of superb essays that avoid the extremes of hagiography and angry polemic in favor of penetrating analysis.
Richard R. Gaillardetz

Scenes of the charismatic John Paul II kissing the tarmac, praying with global religious leaders, addressing throngs of adoring young people, and finally dying linger in the world's imagination. This book turns to another side of this outsized religious leader and examines his vision of the church and his theological positions. Each of these finely tuned essays show the greatness of this man by replacing the mythological account with the historical record. The straightforward, honest, expert, and yet accessible analyses situate John Paul II in his context and show both the triumphs and the ambiguities of his intellectual legacy. This masterful collection is absolutely basic reading for critically appreciating the papacy of John Paul II.
Roger Haight, SJ, Union Theological Seminary, New York

This is a valuable book-challenging and provocative. It brings together many insights that will be foundational for further research on the life and influence of John Paul and his lengthy pontificate.
Worship

This book could well serve as a primer for those wishing a better understanding of the philosophical underpinnings of John Paul II's potificate. . . . what emerges from this volume is a deeper appreciation of the challenges facing a pope who straddled the 20th and 21st centuries. There is little doubt that the authors share a profound respect for John Paul.
Prairie Messenger

The book will serve these two audiences well: professional theologians will learn much from the authors in their own and especially other disciplines, and ordinary churchgoers will be introduced to a larger view of John Paul II. The book would be excellent for discussion groups in Catholic parishes worldwide. Each of these finely tuned essays shows the greatness of this man by replacing the mythological account with the historical record.
Ecclesiology

The various essays in this collection reflect the complexity of the Pope's legacy. This collection provides an important resource for a better understanding of the recent history of the Church and the manifold issues that mark this history. The various essays offer a critical and balanced interpretation of John Paul II's vision.
Catholic Library World

The length of John Paul II's tenure of the papacy, the complexity of his personality, and the ambivalence of his legacy make him not only a compelling subject of study, but also a challenging one. This book, however, succeeds admirably in depicting both the light and shadow of John Paul. The authors have crafted a text that is comprehensive in its themes, nuanced in its approach, and always accessible in its expression. The book will serve as a valuable guide for all those wishing to engage further with John Paul II.
Richard Lennan, Professor of Systematic Theology, School of Theology and Ministry, Boston College

Gerard Mannion is to be congratulated for this splendid collection on the papacy of John Paul II. Well-focused and insightful essays help us to understand his thoughts on philosophy, the papacy, women, the church, religious life, morality, collegiality, interreligious dialogue, and liberation theology. With authors representing a wide variety of perspectives, Mannion avoids the predictable ideological battles over the legacy of Pope John Paul; rather he captures the depth and complexity of this extraordinary figure by the balance, intelligence, and comprehensiveness of the volume. A well-planned and beautifully executed project!
James F. Keenan, SJ, Founders Professor in Theology, Boston College, Chestnut Hill, Massachusetts