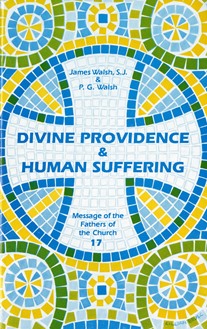 "The editors have gathered an impressive array of texts, drawn from sermons, letter, poems, theological treatises, dealing with the theological, spiritual and human dimensions of suffering. . . . I read the book with great interest, and others will, I am certain, find in it many rewarding passages that speak directly and profoundly to the trials of human life."  -  Robert L. Wilken, Religious Studies Review

James Walsh, S.J. (1920-1986) was founder and editor of The Way for twenty years. With Edmund College OSA he has edited Julian of Norwich in the Toronto Studies and Texts series, and Guigo II in the Sources Chrétiennes series; his editions of The Cloud of Unknowing (Paulist Press 1981) and of Revelations of Divine Love (1973) have reached a wide public. He was on the staff of the Jesuit Centre of Spirituality, St. Beuno's, St. Asaph, N. Wales.

P.G. Walsh (1923-2013) was a Professor of Humanity (Latin) in the University of Glasgow. His publications on Classical subjects include Livy and The Roman Novel (both Cambridge University Press). He has translated the letters and poems of Paulinus of Nola (ACW vols 35-36, 40), Andreas Capellanus on Love (1982), and (with A. Ross O.P.) Aquinas, Courage in the Blackfriar series.