The Aramaic Bible Volume 17A: The Targum of Canticles 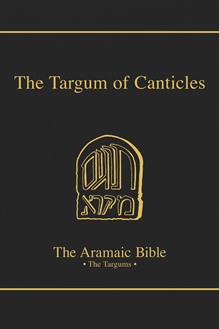 Written in the eighth century C.E., Targum Canticles offers one of the classic interpretations of the Song of Songs. In the relationship between the bridegroom and the bride in the Song, with its rhythm of communion, estrangement and reconciliation, the Targumist discovers allegorical history of God's relationship to Israel from the first exodus from Egypt, to the final exodus from exile when the Messiah comes.

The Targum of Canticles was one of the most popular religious texts within Judaism, and it may have promoted the use of the Song of Songs as the special reading for Passover. It was adapted in the medieval and early modern periods by Christian scholars who saw in the Song a cryptic history of Christ's relationship to the Church. Targum Canticles has played a central role in the interpretation of one of the most puzzling yet influential books of the Bible.

Philip S. Alexander is professor of post-biblical Jewish literature in the University of Manchester, England, and has published extensively in the fields of early Jewish Bible-interpretation (particularly the Targumim), early Jewish mysticism and magic, and the history of Rabbinic Judaism.

The book is a fine contribution to this exegetical series.
The Bible Today