The Aramaic Bible Volume 19: The Targums of Ruth and Chronicles 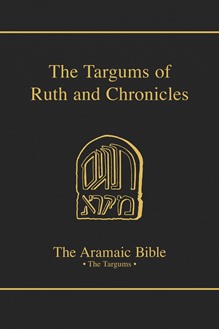 One approach to Chronicles would suggest that it was not considered an altogether vital component in the canon, but later it came to play a specific interpretative role. Others suggest that it came to be regarded as the authorized version of the history of Israel.

In the Jewish liturgical tradition the Book of Ruth is read at the festival of Shavuot, or Pentecost, and it may be conjectured that the Targum originated in conjunction with this practice. The Targum of Ruth exists in a large number of manuscripts; the eight used in the present work are of European provenance.