The Bible, the Church, and Authority

The Canon of the Christian Bible in History and Theology 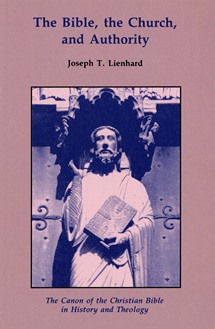 Since the early days of Christianity a tension has existed between the authority of the Bible and the authority of the Church. This has been further heightened by the question of Bible translation: How does the Word stand firm and yet continue to speak to a changing Church?

Joseph Lienhard, a specialist in Early Christianity, examines the evolution of the Christian canon by casting this question against the life of the early Christians. Among the topics treated are the Christian use of Jewish Scriptures, the Catholic and Protestant Old Testaments, the emergence of the New Testament, the struggle for the right interpretation of the Scriptures, the problem of inspiration, and modern attempts to explain the Church's New Testament canon theologically. The book questions the use of historicist methods of interpretation and appeals to the Rule of Faith as the right norm for interpreting the Scriptures in the Church.

Joseph T. Lienhard, SJ, earned his doctorate at the University of Freiburg im Breisgau (Germany) with two dissertations on Paulinus of Nola and Marcellus of Ancyra. His work is in patristics. He taught at Marquette University from 1975 to 1990, and since 1990 has been at Fordham University, where he is also chair of the department of theology. He has published Ministry in the Message of the Fathers of the Church series and other titles.

A relatively brief but well-informed account of the scholarly consensus on the formation of the New Testament canon.
Society for Old Testament Study

I'll save this book and gladly use it as reference and guide.
National Catholic Reporter