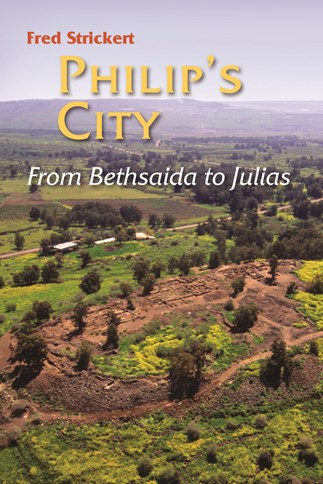 From Bethsaida to Julias
Fred Strickert

In this major revision of his prize-winning 1998 book, Bethsaida: Home of the Apostles, Fred Strickert presents nonspecialist readers with the latest findings in the ongoing excavation and evaluation of et-Tell, now identified by many archaeologists as the site of biblical-era Bethsaida. New discoveries have linked the site back to the Iron Age time of David and revealed new connections to the tetrarch Philip and his family. Strickert develops an explanation for the decline and destruction of the city sharply different from his previous conclusion. Readers of Bethsaida: Home of the Apostles will want to follow the story into this sequel.

Fred Strickert is professor emeritus of religion at Wartburg College in Waverly, Iowa, and is pastor of the Lutheran Church of the Redeemer, Jerusalem. He is the author of Rachel Weeping: Jews, Christians, and Muslims at the Fortress Tomb (Liturgical Press).

Superbly written, this significantly enlarged second edition is a treasure trove of nuanced information interpreting an archaeological site that in recent years has moved to center stage in the interpretation of biblical texts. Covering the story of the Bethsaida project from its inception to its current state, the author weaves striking archaeological finds anchored in their respective historical contexts together with exegetical analyses of the respective biblical and extra-biblical texts. Scholars together with pastors, educators, and lay people alike will find this study, richly illustrated with photos, maps, and diagrams, to be a provocative resource not only for further critical research but for study and discussion purposes as well.
Dr. Mark Appold
Associate Professor of Religious Studies
Truman State University


Those who enjoy biblical archaeology will appreciate the report of the excavations found here and the author's efforts to relate these findings to the gospel traditions.
The Bible Today


Fred M. Strickert's remarkable Philip's City: From Bethsaida to Julias combines the results of two decades of archaeological excavations at et-Tell, identified as the old Geshurite capital from the Iron Age, and much later as Herod Philip's Bethsaida, with numismatic, palaeobotanical, literary, and other evidence to produce a coherent, readable, and outstandingly well documented account of this important city. Richly illustrated with photographs of numerous significant finds, maps, and architectural reconstructions, Philip's City transforms a silent tell in the Southern Golan into a living and vibrant city, the home of David's wife Maachah, mother of Absolom, and the city visited by Jesus.
John S. Kloppenborg
Professor and Chair, Department and Centre for the Study of Religion
University of Toronto, Ontario


Scholars and general readers alike will welcome this exciting and highly informative book. Fred Strickert, long-time staff member of the Bethsaida excavations, shows why `it is crucial that our search for understanding ancient Bethsaida be carried out with a book in one hand and a trowel in the other.' He demonstrates the fertility of the study of Jesus and the Gospels in conjunction with Josephus and the archaeologist's spade. Given the rich synthesis here of recent scholarship and fresh data, this book will surely be noted as a significant contribution to our understanding of Herodian Palestine and the Jesus movement.
Douglas E. Oakman, PhD
Professor of Religion
Pacific Lutheran University
Tacoma, Washington


"A fascinating study of how the temple and city fell into ruin, and makes for a thoughtful and important read for any curios about this period of history. Philip's City is a strong addition to history collections with a focus on the era of the Bible.
The Midwest Book Review