No Tolerance for Tyrants

The Biblical Assault on Kings and Kingship 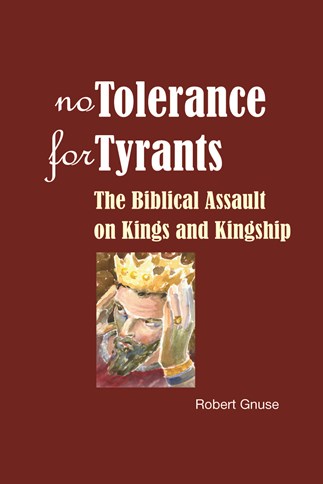 Until the modern era, monarchs were understood to be supported by the power of God; they were, in fact, in some cases thought to be gods themselves. The Bible has often been misinterpreted to encourage such oppressive values. Robert Gnuse, however, argues that the Bible is not a tyrannical text. Rather than displaying the lofty, divine status of kings, the Bible portrays them as human and thus serves as a powerful text for liberation from tyranny and equality for all people. By considering the passages about kings and kingship, Gnuse highlights the liberating message of the Bible and applies that message to today’s world. If we attend to these stories of freedom, we will work toward ending political abuses and foster liberation and equality.

Robert Gnuse, PhD, is the James C. Carter, SJ/Chase Distinguished Professor of the Humanities in the Religious Studies Department at Loyola University New Orleans. He is the author of numerous books and articles in the field of biblical studies.

Weaving together in an accessible style the fruits of current scholarship with excerpts from democratic writings drawing upon the Bible in the 17th and 18th centuries, Gnuse argues convincingly that the biblical critique of kingship is pervasive and revolutionary for its time and ours. Reminding us that many of these texts are so familiar that we cannot see how radical they were, he uncovers the satire, humor, suppressed historical memories, and editorial tweaking that shaped the egalitarian vision of our biblical ancestors in the faith. Surveying biblical texts from the Garden of Eden to the Roman Empire, he calls us to reclaim the Bible as a vehicle of liberation, rather than repression.
Dr. Denise Dombkowski Hopkins
Woodrow and Mildred Miller Professor of Biblical Theology
Wesley Theological Seminary
Washington, D.C.

No Tolerance for Tyrants is a lucidly written guide for students who wonder about the Bible's relevance to modern political life. . . . Gnuse shows that an anti-royal bias is far more widespread in the Bible than scholars have thought, and he brilliantly uses ancient Near Eastern texts to illuminate the biblical polemic even in books like Genesis. [This] book is a wonderful mixture of historical scholarship, perceptive literary analysis, and serious concern to grasp the Bible's message for modern readers. It is biblical theology at its best.
Stuart Irvine
Associate Professor of Religious Studies
Louisiana State University