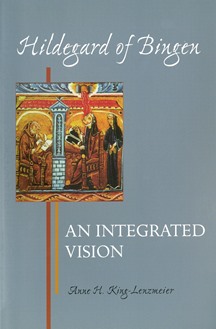 Hildegard of Bingen: An Integrated Vision shows that Hildegard's opus was filled with balance, unity, and a stress on the Gospel—a life and work that served as an inspiration and a challenge for the twelfth century and now for us at the beginning of the twenty-first century.

Hildegard of Bingen: An Integrated Vision considers Hildegard as a whole person and places her within her own century and context. It accents what makes her such a compelling figure for the modern reader while retaining the integrity of her peerless voice. It also serves as an introduction to Hildegard and a resource for simplistic interpretations of a complex and gifted woman whose legacy is a multitude of works.

The first chapter explains Hildegard's mystical polyphony by exploring the forces which shaped Hildegard's development throughout her life, stressing her historical context, personal history, and the setting in which she lived and wrote. Chapter two explores her mystical polyphony in the explicitly visionary theological works: the Scivias, the Liber vitae meritorum, and the De operatione Dei. The third chapter considers Hildegard's musical vision in depth. Chapter four explores her non-visionary works, including the "unknown language," the lingua ignota; her lives of the saints and founders; and her commentaries and theories about the natural world, linked to her cosmology. Chapter five looks at Hildegard's prophetic gifts and voice. It examines her relationships with others: in the communities in which she lived and governed, "in the world" by correspondence or encounter, in her encounters with authority, and in her claim to be an authority in her own right.

King-Lenzmeier concludes with such questions as What makes Hildegard unique as a mystic, and what does she share with others? and How is Hildegard's mystical journey a paradigm for other mystical journeys? She draws forth the major elements that integrate Hildegard's life and work and indicates in what way she is an example for other mystics who share her polyphonic character and spiritual path. The final chapter demonstrates Hildegard's uniqueness among the mystics while presenting the universal appeal of her mysticism.

By considering all of Hildegard's talents, works, and trials Hildegard of Bingen: An Integrated Vision shows the depth of the challenge she presents to us. She calls us to look beyond the everyday, but to value it at the same time; to challenge our preconceived notions of gender in the divine and human spheres; to see that in times of hardship we cannot give up; and to love life, even when it is hard to bear. She gives us her example and her tools: now it is our turn to figure out, singly and together, how to bring viriditas more fully into the world of today and tomorrow.

Chapters are "Shaping Forces," "Mystical Polyphony in the Visionary Works," "Bringing the Strands Together—The Gift of Music," "Earth and Heaven in Dialogue," "From Mystical Vision to Prophetic Witness," and "Concluding Remarks." Includes illustrations.

The author fulfils her objective to make Hildegard accessible to readers without compromising who she truly is.'
Prairie Messenger