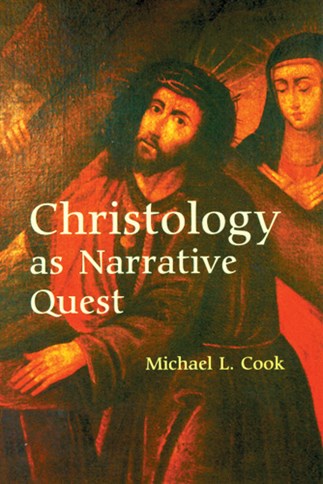 How central is narrative to Christology? To human experience?

In exploring these questions Michael Cook maintains in Christology as Narrative Quest the primacy and centrality of narrative in communicating the significance of Jesus Christ, and demonstrates ways in which "narrative" in four faith images has played a role in the shaping of Christology. These forms and their texts are: biblical (the Gospel of Mark); creedal (the Nicene-Constantinopolitan Creed); systematic (Aquinas' Summa theologiae); and social transformation (the "story" of Mexican-Americans.) All of these images are ways of using narrative imagery to connect idea and experience.

A detailed analysis reveals that each of these forms involve what well-known ethicist Alasdair MacIntyre calls a "narrative quest." In each case an image of Jesus that is fundamental for integrating a particular form of the "narrative quest" emerges.

Father Cook contends that Christology in any age is the culture-specific faith response of the community of believers/disciples (Church) to the mystery of the risen Jesus a mystery that, identified with the very life, activity, and presence of God, simply transcends any attempt we make, whether biblical, creedal, systematic, or societal, to bring it to expression.

The four faith images (biblical, creedal, systematic, social transformation) and their texts broadly correspond to significant periods in the history of Christianity: the Jewish-Gentile Church, the Hellenistic-Byzantine (imperial) Church, the Latin-Western (papal) Church, and the contemporary, post-Vatican II emergence of the world-wide Church.

Graduate students, academicians, and others who want a scholarly or professional reference work will appreciate this substantive look into the relationship of narrative and Christology.

Chapters examine the four faith images. They are "The Centrality of Narrative in Christology," "A Biblical Image: 'The Beloved Son' in the Gospel of Mark," "A Creedal Image: 'The Pre-Existent Son' in the Nicene-Constantinopolitan Creed," "A Systematic Image: 'The Incarnate Word' in the Summa theologiae of Thomas Aquinas," and "A Social Transformation Image: 'The Rejected Prophet' in the Mexican-American Experience."

Michael L. Cook, SJ, ThD, is a professor of theology at Gonzaga University. He also taught at the Jesuit School of Theology in Berkeley and was a visiting professor at the Catholic University in Santiago, Chile. He is the author of Responses to 101 Questions About Jesus.

Written with exceptional clarity, thoroughly documented, and filled with exciting insights. . . . In one short volume, Father Cook bridges scriptural, creedal, theological, and social transformational images of Jesus, and in doing so offers all serious students a textbook that documents how our image of Jesus has developed and that challenges us to maintain that image alive in our own time. The many bibliographical references and extended notes further enrich the usefulness of this book as a resource for clergy, leaders in adult education and catechetics, and teachers.
Leonard Doohan, Gonzaga University

This is Michael Cook's chef d'oeuvre a unique blend of solid research and creative insight. Through an examination of biblical, creedal, systematic, and liberationist images of Jesus, the author demonstrates the centrality of narrative in any understanding of Christ. Attentive to four 'moments' in the quest for appropriate ways to speak of Jesus, Cook shows that interlacing the story of Jesus with our story as persons and as a people, is first and finally how we come to understand who Christ is and who we are as his followers.
Michael Downey, Editor, The New Dictionary of Catholic Spirituality

This creative interpretation of Christology through different cultural contexts is clear, insightful, creative, and teachable to scholars and students. It opens up a new vista for understanding Christology.
J. J. Mueller, S.J., St. Louis University