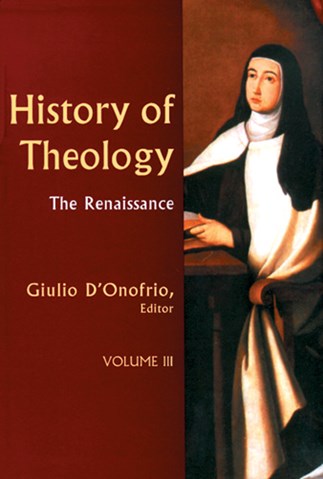 In this, the third volume of a multiple-volume series, Giulio D'Onofrio examines the history of theology and the basic innovations in theological thought during the Renaissance era. He explores the councils, people, movements, pedagogy, and theological methods of the fifteenth and sixteenth centuries.

From the beginning of the fifteenth century on, the unresolved crisis that was fragmenting Christendom led to an urgent call for a renewal of the methods, themes, and purposes of theological thought.

To the humanists who had a renewed interest in the works of the Church forebearers the patristic sources were no longer simply authorities to be regularly cited in support of the technical divisions of the questions under discussion. They also represented another way of thinking that followed freer and more fruitful criteria than those rigidly fixed by medieval Aristotelian rationalism. This new relationship with the patristic model was one factor that distinguished the periods of the Renaissance and the Middle Ages.

In History of Theology III: The Renaissance Giulio D'Onofrio points out how this call for a renewal of the methods, themes, and purposes of theological thought established important and unrenouncible premises both positive and negative for the development of philosophical and theological thought in the modern age.

Translated from Italian, this scholarly work is carefully organized and annotated. Text and chronological tables are included along with a list of abbreviations, a topic index, and an index of names.

. . . an important book in a series that, when completed, will belong in all research libraries and in the collections of all institutions with a serious interest in Christian theology.
Theological Studies