The Encyclopedia of American Catholic History 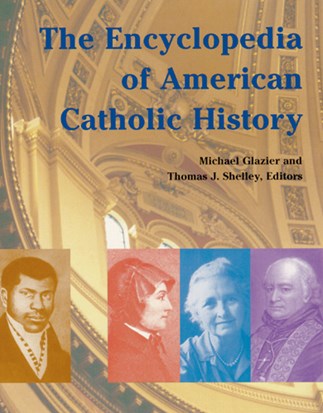 This first reference work of its kind ever published in the United States is a splendid and unique achievement created by hundreds of historians and writers who cooperated to narrate the saga of American Catholicism. Beginning with Columbus, this comprehensive work spans half a millennium and covers the men, women, and events that shaped Catholic life in a vast and diverse nation. Over 1,200 articles, 300 photographs, and a million words comprise this elegant volume, which provides American Catholics with a panoramic and extraordinary education in their identity and heritage.

Edited by Michael Glazier and Thomas J. Shelley, The Encyclopedia of American Catholic History recounts the struggles and status of American Catholics in every generation of the nation's history. It also narrates and charts the phenomenal growth of the Church in each of the fifty states. It contains hundreds of factual biographies of men and women from all stratas of society. It focuses on the explorers; the pioneering Spanish, French, and English missionaries; the struggles of the colonial and revolutionary era; the turbulent and transforming nineteenth century with its waves of immigrants; the industrial revolution; and the challenges and crises of this century, down to our day.

All the major events and movements which united or divided Catholics are covered: The Revolution, Lay Trusteeism, slavery and the Civil War, the arrival of immigrants, Nativism and bigotry, Americanism, Modernism, the Labor Movement, the Knights of Columbus, wars, anti-semitism, the New Deal and Prohibition, anti- Communism, McCarthyism, the Women's Revolution, civil rights, Vietnam, Human vitae, liturgy, and capital punishment. Other subjects, which were often neglected by past historians, are given greater consideration. These include the role of women and Native Americans and the growth of Catholicism in the United States. The great personalities men and women from each decade and era are perceptively portrayed, and rewarding attention is given to the women lay and religious who played a major role in educating and forming the Catholic children of America for over five generations.

Entries are arranged alphabetically for convenient use by those who preach, teach, or study. The primary aim of each entry, whether it reflects some original research or summarizes existing scholarship, is to provide basic information while its bibliographical citations open the road to further study.

The American Catholic Church has been the home to a vast variety of people. The notable men and women who appear in these pages represent countless millions who are little known. But American Catholicism today is the living monument to their lives and labors. Knowing their history gives today's Americans confidence, and The Encyclopedia of American Catholic History is a celebration of their faith.

Over four decades ago, Michael Glazier began his publishing career in Ireland. After coming to America he studied the focal aspects of U.S. publishing, from book design to marketing and eventually became a consultant to a group of American and European publishers. In 1972 he founded Scholarly Resources Inc., which specializes in diplomatic, legal and congressional history. He initiated and directed the publication of standard reference works including the 150-volume British Parliamentary Papers of the Eighteenth Century. In 1977 he founded Michael Glazier Inc. which published both scholarly religious and secular titles including The National State Papers of the United States and The Plymouth Court Records. He also published The New Dictionary of Theology and The Aramaic Bible: The Targums series available through The Liturgical Press. He received several awards for his contribution to patristic, theological and biblical studies.

The Encyclopedia of American Catholic History

Highly recommended for libraries and individuals with an interest in the topic.
Virginia Quarterly Review

I need this book. My gratitude to the compilers of this enormously helpful work. This is an awesome tool of scholarship. It will be a valuable addition to every reference shelf. A necessary tool for scholars, writers, historians, students and learners of all kinds. This achievement, with entries on individuals, groups, ideas, places, movements, is wondrous.
Harry James Cargas, Webster University

This encyclopedia fills a void. It puts on record for the current generation and those to follow the rich contributions of Catholics to American life and culture. The topical mix is wide-ranging and the authors authoritative and engaging. Scholars and browsers alike will find here much that is of interest. Entries include Catholics and the labor movement, African American Catholics, American Catholic women, Catholics and the liturgical movement, and hundreds of notable individuals from comedian Fred Allen to Clare Booth Luce to Father John LaFarge to the four martyred women missioners in El Salvador. The book belongs in school libraries, parishes, and on the home shelves.
Philip J. Murnion, National Pastoral Life Center

Anyone who reads American history or even specifically American Catholic history for whatever purpose will welcome this companion reference. Here persons and topics often mentioned only in passing in such works are put into their broader contexts, and the details of their relevance to those contexts fleshed out. The bibliographies appended to individual articles are especially useful pointers to further resources.
Suzanne Noffke, O.P.

An exciting blend of old and new makes Glazier and Shelley's Encyclopedia of American Catholic History a useful tool for those who want to have at their fingertips a complete necrology of American bishops along with a compendium of the development of Catholicism in every state in America. But the real pièce de résistance are those entries on women (religious and lay), African Americans, and population changes.
Suellen Hoy, University of Notre Dame

Should be in public, parish and school libraries. Excellent jubilee gift or class gift to religion and history teachers in Catholic schools.
The Sunday Star-Ledger

The contents of this dictionary go far beyond the usual selections in American Catholic historiography. Clearly the editors aimed, not only at highlighting the well-known facets of U.S. Catholic history, but at uncovering persons, trends, and traditions that have previously been ignored even by many historians. The result is a work that introduces the reader to a broad range of significant women and men, events, and crises that were at the heart of creating and developing the American Catholic world. Historians well-versed in specific aspects of the Catholic past have been called upon to tell the elaborate story. So wide is the net of data cast in this volume that the product can serve as an extremely useful reference tool for those who search for a fuller picture of what has forged the American Catholic identity today.
Dolores Liptak, R.S.M.

An impressive and highly recommended companion volume to the publisher's widely acclaimed dictionary on Catholic social teaching and other subjects. It will be welcomed enthusiastically not only by amateur American Church buffs like myself but also by credentialed scholars in the field, many of whom have contributed key chapters in their areas of specialization. As an added bonus, it also makes for good spiritual reading because it recalls in ample detail the heroic zeal of so many of our long forgotten forebears in the history of the Church in the United States.
George G. Higgins, The Catholic University of America

What a magnificent reference work!
The Journal of American History

. . . The Encyclopedia of American Catholic History is the best reference work available on U.S. Catholic history. The fine quality of the entries and the vast range of topics examined makes this a remarkable source of information.
America

. . . a splendid achievement. The choice of entries is thoughtful, creative and comprehensive. The articles are high quality, written by top scholars and embody the most recent research. The encyclopedia will be an essential acquisition for any academic library, for anyone working seriously in the field or simply for buffs who enjoy random strolls though nugget-strewn groves.
Los Angeles Times

This is one of those texts that is as tempting as a dish of peanuts; one casual munch and the reader is hooked for hours and, better, nourished as well.
Commonweal