Chronicles and its Synoptic Parallels in Samuel, Kings, and Related Biblical Texts 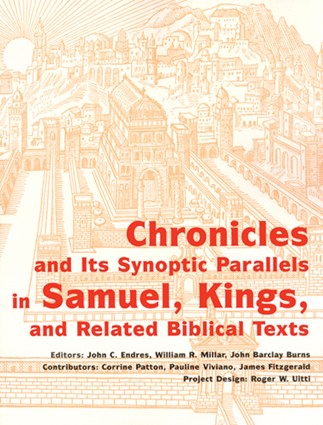 The importance of synoptic parallels for study of the Hebrew Bible and the emergence in recent decades of fresh energy for studying the book of Chronicles has inspired scholars across North America to take a new view of the historical books of the Old Testament (Samuel, Kings, and Chronicles). Chronicles and Its Synoptic Parallels in Samuel, Kings, and Related Biblical Texts provides a synoptic view of these historical books, facilitating for students the study of them in relation to each other and to other selected parallel texts in the Hebrew Bible.

The author of Chronicles used much of Samuel and Kings in presenting his version of Israel's "history." With this book, readers can easily see how the Chronicler refashioned many texts in Samuel- Kings and incorporated details and passages from other biblical books such as the Psalms and Isaiah. Chronicles and Its Synoptic Parallels in Samuel, Kings, and Related Biblical Texts demonstrates that the Chronicler was a student and interpreter of sacred texts as well as a historian for his era.

Since many biblical translations of these Old Testament books have not focused on the issue of parallels, Chronicles and Its Synoptic Parallels in Samuel, Kings, and Related Biblical Texts features a fresh translation based on the principle of synoptic parallels. This version respects the literary order and integrity of each text, even when that means foresaking the chronology. For students of Samuel- Kings (and the rest of the deuteronomistic history) this book provides an important key to understanding that history in the early Jewish era in which Chronicles was written. It also assists those whose interests in these books are religious and theological as well as literary and historical.

Chronicles and Its Synoptic Parallels in Samuel, Kings, and Related Biblical Texts provides Chronicles as the lead text in part one and Samuel-Kings as the lead text in part two. The text is in a parallel format so that readers can easily follow the text from Samuel-Kings, from Chronicles, and from other parallel texts. An introduction explains the value of synoptic parallel study of these books; reviews other tools available and describes their particular tendencies; provides the editors' translation principles; summarizes the content; and shows how these synoptic parallels can be used in a variety of different approaches to biblical study (literary, historical, compositional, theological). A chart of synoptic relationship is also included.

John Barclay Burns teaches in the department of philosophy and religion at George Mason University, Virginia.

John C. Endres, SJ, (1946-2022) was Emeritus Professor of Scripture at the Jesuit School of Theology (in Berkeley) of Santa Clara University.

William Millar teaches in the department of religion at Linfield College in Oregon.

Corrine Patton teaches in the department of theology at the University of St. Thomas in Minnesota.

Jim Fitzgerald shares interests in the deuteronomistic and Chronicler's histories.

Students (and I suspect even one or two teachers) will find this useful.
Journal for the Study of the Old Testament

This excellent fresh study of parallel texts found in the Books of Chronicles and elsewhere in the Hebrew Bible is both a contribution to the recent scholarly interest in Chronicles and a superb tool to help further that interest. . . . A splendid plan, splendidly brought to completion.
Walter Harrelson

This book is an important step forward in the study of the Bible. . . . The authors deserve our thanks for the years of work and cooperation which were necessary to complete this project.
Loren Mack-Fisher