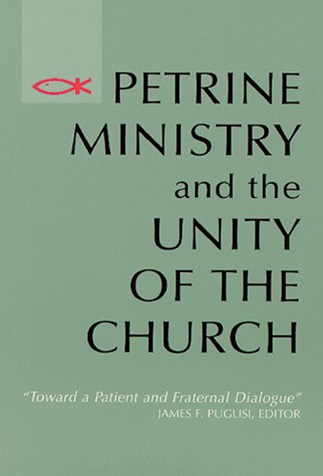 Petrine Ministry and the Unity of the Church

In the context of the ecumenical dialogues which have taken place after the Second Vatican Council, few topics have generated as much discussion and reflection as that of the papacy. What has been the function of this service of unity? What are the foundations of its existence? What are its unrelinquishable elements which cannot change? What can be renewed in the manner in which the office is carried out?

John Paul II's encyclical "On Commitment to Ecumenism" (Ut unum sint) inspired these essays originally presented at a symposium in Rome. In this encyclical the Bishop of Rome recognizes the difficulty that the Petrine office holds for many on the ecumenical journey and exhorts Church leaders and theologians to engage [him] in a patient and fraternal dialogue on his ministry. This symposium was the first attempt to begin this dialogue in Rome with theologians from many Christian traditions: the oriental and orthodox, the Anglican, Lutheran, Reformed, Methodist, Baptist and Free Church traditions.

The contributors are all theologians and historians who have been involved in the official dialogues of their Churches or with the dialogue process of the Faith and Order Commission of the World Council of Churches.

Articles and their contributors are: Introduction, by Pierre Duprey; Historical Considerations Concerning the Problem of the Primacy, by Klaus Schatz, SJ; Suprema auctoritas ideo ab omne errore immunis: The Lutheran Approach to Primacy, by Harding Meyer; Primacy and Unity: An Anglican Contribution to a Patient and Fraternal Dialogue, by John Hind; The Gift Which He on One Bestows, We All Delight to Prove: A Possible Methodist Approach to a Ministry of Primacy in the Circulation of Love and Truth, by Geoffrey Wainwright; The Primacy of the Successor of the Apostle St. Peter from the Point of View of the Oriental Orthodox Churches, by Mesrob K. Krikorian; Papal Primacy in Eastern and Western Patristic Theology: Its Interpretation in the Light of Contemporary Culture, by Dumitru Popescu; Primacy in the Church: An Orthodox Approach, by Metropolitan John (Zizioulas) of Pergamon; Conciliarity-Primacy in a Russian Orthodox Perspective, by Nicolas Lossky; The Ministry of Unity and the Common Witness of the Churches Today, by Lukas Vischer; The Petrine Ministry and the Unity of the Church: A Baptist Perspective, by Erich Geldbach; Trinity, Unity, Primacy on the Trinitarian Nature of Unity and Its Implications for the Question of Primacy, by Miroslav Volf; The Ecumenical Kairos and the Primacy, by Jean-Marie R. Tillard, OP; and Afterword, by James F. Puglisi.

James F. Puglisi, SA, is director of the Centro Pro Unione, Rome and professor of ecumenical theology at the Pontifical University of St. Thomas Aquinas-Angelicum, Pontifical Atheneum, San Anselmo, Rome and the Institute of Ecumenical Studies, Venice. He is the author of the Process of Admission to Ordained Ministry series published by The Liturgical Press.

The list of names of participants is by itself sufficient guarantee of their high theological competence on the subject.
Gregorianum