The New Jerusalem in the Revelation of John

The City as Symbol of Life with God 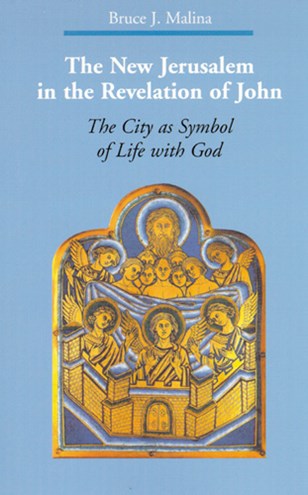 There are two major entities at the close of the book of Revelation that explain the author's understanding of forthcoming life with God: the Celestial City (the heavenly Jerusalem) and the cosmic Lamb. The marriage of these two marks the concluding highpoint of John the Seer's work. What are the entities in question? How do they marry and what is the significance of that event for those who believe in Jesus as cosmic Lord? In The New Jerusalem in the Revelation of John, Bruce Malina offers insights into the concluding vision of the book of Revelation to assist Bible readers to understand what the visionary of Revelation said, and meant to say, to his first-century Mediterranean audience.

The New Jerusalem and the Revelation of John sets out comparative models of what sorts of cities existed during the time of the New Testament and what it meant to live in an ancient Mediterranean city. It further explains the significance of the celestial marriage of the City and the Lamb. The result is a set of reading scenarios that describe and explain Revelation's closing visions, which mediate the theology of John the Seer. The definition and comparative model of the city in The New Jerusalem and the Revelation of John is also useful for persons interested in understanding those first "urban" members of Jesus groups addressed by other New Testament documents.

Chapters are "Presuppositions about Language and Reading," "The Genre of the Book of Revelation," "The Holy City in the Sky," and "The Cosmic Lamb Marries." Includes relevant charts.

Bruce J. Malina, STD, is professor of biblical studies at Creighton University. He is former president of the Catholic Biblical Association and author of articles on biblical interpretation.

Malina in these reflections has mediated a significant approach to Revelation.
Irish Theological Quarterly

This volume is an eminently readable, commonsense approach to aspects of the Book of Revelation. . . . It complements Malina's earlier work on the genre of the Book of Revelation, and offers not only a clear understanding of how to read ancient documents, but also a sensible, persuasive interpretation of this part of the Book. . . . Malina is to be congratulated for his insight, commonsense, helpful commentary, and his clarity.
T. R. Hobbs, Hamilton, Ontario

Malina has done it again. His penetrating insights cut through the fog of interpretations beclouding the Book of Revelation to clarify its concluding vision. God will be henceforth present among humans on earth in the New Jerusalem, a city descended from the sky that contains the Throne of God and the celestial Lamb, cosmic symbol of Jesus. The Mediterranean cultural aptness of this explanation, Malina's specialty, highly recommends it as John the astral prophet's intended meaning for all his readers.
John J. Pilch, Author of The Cultural World of Jesus and The Cultural Dictionary of the Bible

Against the commonplace notion that Revelation is a morbid forecast of doom, death, and destruction, Malina demonstrates the upbeat and hope-promoting force of its conclusion: a life-affirming vision of a marriage of the Cosmic Lamb (Jesus) and his bride, the Celestial City (the new and perfect Jerusalem), graphic astronomical symbols of life with God. Malina serves as an informative tour guide introducing the modern reader to the ancient world of John, its urban life, its occupation with astral phenomena as signs of the time, and Christianity's utopic vision of new life with God.
Rev. John H. Elliott, Department of Theology and Religious Studies, University of San Francisco

The New Jerusalem in the Revelation of John is vintage Malina: provocative, at times humorous, fascinating, devastating to conventional understandings, blunt, and passionately devoted to the social sciences, especially cultural anthropology, as key to interpreting the New Testament. Malina's new work continues to unfold the implications of his earlier research into ancient astrology and the book of Revelation. The result is a vivid and perceptive reading of the new Jerusalem and the Lamb that locates them squarely in ancient conceptions of the city and the sky.
Walter F. Taylor, Jr., PhD, Ernest W. and Edith S. Ogram Professor of New Testament Studies, Trinity Lutheran Seminary, Columbus, Ohio