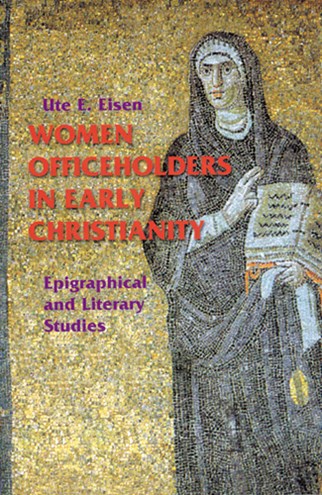 Women Officeholders in Early Christianity is a scholarly investigation of the evidence for women holding offices of authority in the first several centuries of Christianity. Ute Eisen focuses on inscriptions and documentary papyri (private letters, official documents, contracts, and other such pieces) that have scarcely been considered before.

Eisen presents the first extensive documentation of selected Greek and Latin inscriptions, plus a few documentary papyri, that witness to the existence of Christian women officeholders. The intent is to show the multiplicity of titles borne by women and to illustrate the narrowness of previous research on this topic. A single chapter is devoted to each of the titles of office or functional designations found in the sources. The epigraphical, papyrological, and literary witnesses are accordingly grouped by function. Topics are "Apostles," "Prophets," "Teachers of Theology," "Presbyters," "Enrolled Widows," "Deacons," "Bishops," and "Stewards."

Central to Women Officeholders in Early Christianity are the epigraphical witnesses. To this point they have been only marginally incorporated into research on women officeholders in the Church. In order to ensure correct interpretation, the majority of the inscriptions discussed have extensive documentation. They are organized geographically and chronologically. Besides the documentation they are commented on in the context of the existing literary sources. The book concludes with a chapter entitled "Source-Oriented Perspectives for a History of Christian Women Officeholders." The book also includes a bibliography of reference works, primary sources, and secondary sources.

Ute E. Eisen is a Wissenschaftliche Assistentin at the Institute of New Testament Studies and Ancient Judaism at the University of Kiel, Germany. She has a doctorate in theology from the University of Hamburg. Her special areas of study include narrative analysis of Luke-Acts, methodology in New Testament studies, history of early Christianity, and gender studies.

. . . may well be the first extensive documentation of selected Greek and Latin inscriptions to be used to substantiate the role of women as officeholders, its use as an academic text is quite possible.
Catholic Library World


Readers wishing for a more balanced approach to archaeological and literary evidence for women officeholders in the early church will welcome this translation of Ute Eisen's scholarly treatment of the subject.
Trinity Seminary Review


I enthusiastically recommend the book as required reading not only for college and seminary students but also for clergy, church leaders and anyone interested in Western history or questions of church and ministry.
Elisabeth Schüssler Fiorenza, Krister Stendahl Professor of Scripture and Interpretation, Harvard University Divinity School


. . . such archaeology has the power to challenge and revise church history as we have known it. It can teach us to read traditional sources with a more critical eye and to encourage other feminist researchers to keep digging for the truth underneath the sexism.
EEWC Update


Eisen's work is something of a watershed in the study of women in early Christianity, and its welcome appearance in English will be of tremendous interest to scholars and students, and to church members and leaders. This will become a standard reference, and it will also renew some debates.
Anglican Theological Review