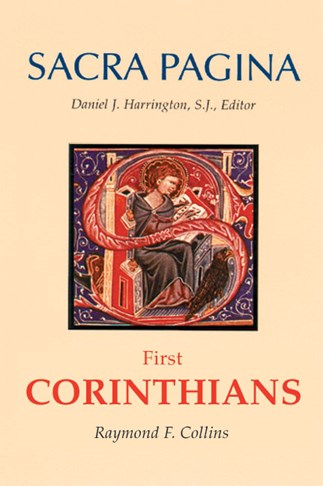 Now Available in Paperback!
One of the most exciting of Paul’s letters, First Corinthians offers a vantage point from which modern readers can reflect on the diversity in Christian Churches today. In First Corinthians, Raymond Collins explores that vantage point as well as the challenge Paul posed to the people of his time’and continues to pose in ours’to allow the gospel message to engage them in their daily lives.

Paul introduces us to a flesh-and-blood community whose humanness was all too apparent. Sex, death, and money were among the issues they had to face. Social conflicts and tension within their Christian community were part of their daily lives. Paul uses all of his diplomacy, rhetorical skill, and authority to exhort the Corinthian community to be as one in Christ.

In examining Paul’s message and method, Collins approaches First Corinthians as a Hellenistic letter written to people dealing with real issues in the Hellenistic world. He cites existing Hellenistic letters to show that Paul was truly a letter writer of his own times. Collins makes frequent references to the writings of the philosophic moralists to help clarify the way in which Paul spoke to his beloved Corinthians. He also comments on some aspects of the social circumstances that shaped the Christians of Corinth.

Raymond Collins, PhD is a priest of the Diocese of Providence and is the dean of the School of Religious Studies at The Catholic University of America. He is the author of John and His Witness and Divorce in the New Testament published by Liturgical Press.

This series is uniformly excellent with its common format of introductory chapter, general structural outline and bibliography, followed by verse-by-verse commentary on the entire text of the NT book in question.
Catholic Library World

. . . the professional reader will find his/her knowledge of the canons of ancient rhetoric and the extant literature of the philosophical schools broadened.
Toronto Journal of Theology

In addition to the translated text itself, First Corinthians is packed cover to cover with methodological perspectives, background information, interpretations, sources for reference and further study, and much more. Written for intermediate to advanced Bible studies students, and a singularly valuable tool for professionals, clergy, and religious educators, First Corinthians is as highly recommended for its depth and exacting scrutiny of source material as the rest of the Sacra Pagina series.
The Midwest Book Review

Looking at this commentary on First Corinthians with the eyes of a college professor who teaches an introductory course on Paul, my first question is: Can I recommend it to a non-specialist, undergraduate student as a reliable source to do a paper on Paul? The answer is an unqualified, enthusiastic Yes!
Catholic Books Review

This commentary on First Corinthians continues the fine tradition of the Sacra Pagina commentary series.
The Catholic Journalist