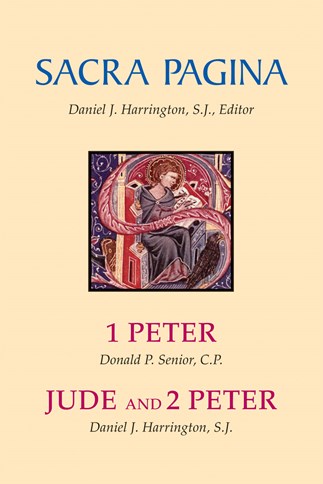 Crisis in the church is not a new phenomenon. In fact, the church has always been’and probably always will be’involved in some kind of crisis. Even in the apostolic period, which is regarded by many as the church’s golden age, there were serious crises coming both from the outside, as in 1 Peter, and from the inside, as in Jude and 2 Peter. The three short New Testament letters treated in 1 Peter, Jude and 2 Peter illustrate the problems early Christians faced as well as the rhetorical techniques and theological concepts with which they combated those problems.

In the first part of this volume, Donald Senior views 1 Peter as written from Rome in Peter’s name to several churches in northern Asia Minor’present-day Turkey’in the latter part of the first century CE. The new Christians addressed in 1 Peter found themselves aliens and exiles in the wider Greco-Roman society and suffered a kind of social ostracism. But they are given a marvelous theological vision of who they have become through their baptism and pastoral encouragement to stand firm. They are shown how to take a missionary stance toward the outside world by giving the witness of a holy and blameless life to offset the slander and ignorance of the non-Christian majority and possibly even to lead them to glorify God on the day of judgment.

In the second part of this volume, Daniel Harrington interprets Jude and 2 Peter as confronting crises in the late first century that were perpetrated by Christian teachers who are described polemically as intruders in Jude and as false teachers in 2 Peter. In confronting the crises within their churches, the authors appeal frequently to the Old Testament and to early summaries of Christian faith. While Jude uses other Jewish traditions, 2 Peter includes most of the text of Jude as well as many distinctively Greek terms and concepts. It is clear that for the authors, despite their different social settings, what was at stake was the struggle for the faith.

Daniel J. Harrington, SJ, is a professor of New Testament at Boston College School of Theology and Ministry in Cambridge, Massachusetts. He has written numerous works, including What Are We Hoping For? New Testament Images, Why Do We Hope? Images in the Psalms, and Jesus Ben Sira of Jerusalem: A Biblical Guide to Living Wisely, all published by Liturgical Press. Harrington is editor of the Sacra Pagina series, for which he also authored The Gospel of Matthew and coauthored The Gospel of Mark.

Donald Senior, CP, is president of Catholic Theological Union in Chicago, where he is also a member of the faculty as professor of New Testament. He is the general editor of the acclaimed Catholic Study Bible (Oxford University Press, rev. ed., 2006), coeditor of The New Interpreters Study Bible (Abingdon Press, 2003), and editor-in-chief of The Bible Today. His publications include the four-volume The Passion series (Liturgical Press), Jesus: A Gospel Portrait (Paulist Press, rev. ed., 1994), What Are They Saying About Matthew? (Paulist Press, rev. ed., 1996), and a commentary on the Gospel of Matthew (Matthew. Abingdon Press, 1998). He is past president of the Catholic Biblical Association of America. In 2001 Pope John Paul II appointed him as a member of the Pontifical Biblical Commission and he was reappointed in 2006 by Pope Benedict XVI.

In this excellent commentary Fr. Benjamin Fiore, SJ, who was educated in Greek and Latin classics, Pauline literature, and ancient rhetoric (PhD, Yale, 1982), and is now president of Campion College, University of Regina, offers the best of contemporary historical and literary interpretation of the New Testament Pastoral Epistles. A devoted pastor himself, Fiore is adept at perceiving the pastoral interests in these letters. His tasty gourmet scholarship is spiced with valuable references to Jewish, classical, and patristic writers, and is noteworthy for its references to the ancient rhetoricians. Laid out in the Sacra Pagina format, with verse-by-verse exegesis, general interpretation, and up-to-date bibliography, it will be a very valuable tool for all serious students of the Bible.
Dennis C. Duling, Professor of Religious Studies & Theology, Canisius College, BU