Bonnie B. Thurston and Judith Ryan 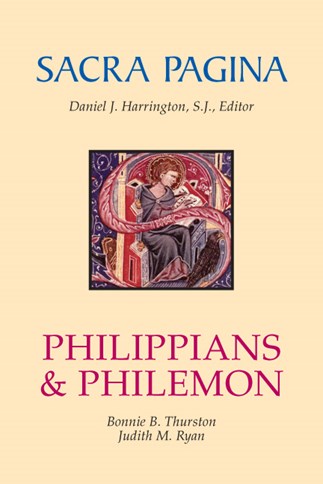 Although relatively brief, Philippians is one of the most interesting and beloved of Paul's undisputed epistles. In Philippians and Philemon, Bonnie Thurston makes a convincing case that canonical Philippians is as Paul wrote it, one letter. Although there is not enough specific evidence to "name names," she suggests a number of possible audiences. A translation conforming as closely as possible to the original Greek is provided, along with a careful analysis of the language of the letter that yields insights into the context and theological underpinning of this epistle.

The apostle's very brief letter to Philemon stands solidly within the Pauline collection of authentic and canonical letters. In this volume, Judith Ryan argues that Philemon makes two specific appeals. The first seeks to elicit Philemon's partnership and his community's support in welcoming Onesimus back as both beloved brother and honored guest. The second requests that Onesimus be allowed to use the freedom he already has to serve Christ and his Gospel. In this commentary Ryan provides a fresh translation, critical notes for each verse, and interpretation on defined sections. She situates the letter in the historical context of slavery in the ancient world and shows how Paul combined his theology with contemporary rhetorical strategies to produce an effective challenge to his audience.

Bonnie B. Thurston, PhD, lives in West Virginia in solitude. She is ordained in the Christian Church (Disciples of Christ) and the author of several books, including The Spiritual Landscape of Mark and Religious Vows, the Sermon on the Mount, and Christian Living (Liturgical Press) and Preaching Mark (Fortress Press).

I have made use of the commentary in sermon preparation and it is very good.
West Virginia Christian Church News

Each of the authors of these commentaries does great justice to the beauty of these Pauline materials, providing a fresh working translation and theologically sensitive analysis of the text. Readers who might want to plunge deeply into Paul's theology could do well to start here.
The Bible Today

. . . edifying to all Christian groups.
The Catholic Biblical Quarterly

. . . a welcome addition to the series, and will be useful to preachers in particular.
Interpretation

Thurston's avowed concentration upon prayer and spirituality is to be welcomed in a field of scientific study that too often forgets the ultimate purpose of the Bible, which is to build up the community of faith.
Cistercian Studies Quarterly

. . .form a formidable programme for continuous reading, but a sensible and judicious selection from the material offered will enrich any reader anxious to grow in the knowledge and love of Scripture, and of the world in which it arose.
The Way

I sincerely recommend this book to Bible professionals, clergy, theologian students, and laity committing to the Holy Scripture. Though it is not difficult to find good commentaries on the letter to Philippians and the letter to Philemon, this book has its own characteristic readers are not allowed to miss.
China Graduate School of Theology Newsletter

. . . an excellent introduction and discussion of pertinent issues that will be of interest and use to . . . scholars, students, clergy and religious educators. . . . a valuable contribution to the Sacra Pagina series.
Toronto Journal of Theology